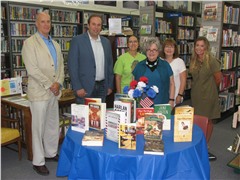 It all started with an idea of Darlene Carre, a library clerk at Riverside Regional Library in Scott City. She thought it would be good to teach the U.S. Constitution to youngsters during the summer reading program.

“Wouldn’t it be awesome if we could offer every child his or her own copy?” she asked herself.

Carre knew pocket-sized copies of the U.S. Constitution were available for purchase, but the library has a budget it must operate within.

One day, as she was about to throw away a postcard she had received from U.S. Rep. Jason Smith, she noticed there were phone numbers on the card to contact his office. She called the Cape Girardeau office and requested the booklets.

Debbie Griffin, constituent services specialist in Smith’s Cape Girardeau office, tried hard to fulfill her request. She had a few booklets in her office. She called other offices of Jason Smith in the region and was able to collect a handful of the booklets, which were given to the library.

But that was only the beginning. She let Carre know, “We’re going to do something very special for you.”

When Smith was elected to Congress, he learned about the Library of Congress, which contains copies of every book published in the U.S. Some of them are rare, important  books, including Bibles used for presidential inaugurations, but not all are.

Smith learned that as a congressman, he can check out any book he wants.

He also  learned that the Library of Congress receives multiple copies of books, and while it keeps one copy, it makes duplicates available to donate to other libraries.

Thanks to Smith’s efforts, 10 boxes filled with duplicate books from the Library of Congress were donated to Riverside Regional Library. They were delivered to the Scott City branch on Thursday morning.

Because the original request for booklets had come from Carre in Scott City, the books were delivered there. Smith was unaware that the Riverside Regional Library has six locations in three counties.

Jeff Trinkle, director of Riverside Regional Library, said the books will be brought to the main office in Jackson and cataloged. Since they were originally delivered to the Scott City branch, Scott City has first dibs on any books it wants.

The rest will be distributed among the six branches, depending upon which branch needs which book. If some branches have a copy of a book that is in disrepair, it will be replaced by the Library of Congress copies, and the old book will be given to the Friends of the Library to be sold in book sales. (The funds raised from library book sales go back into funding library projects.)