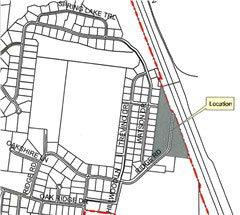 Residents
from Bent Creek Subdivision voiced opposition to the rezoning of a 10.85-acre
tract of land between the subdivision and I-55 during a public hearing at the
Jackson Mayor and Board of Aldermen meeting Feb. 17.

Williams
Brothers Contracting, LLC and BBratz, LLC are seeking to rezone the tract from
R-2 (single family) to R-4 (general residential) in order to build duplexes
similar to those found in that section of Bent Creek.

R-4
(general residential) zoning would allow for the building of apartment
complexes on this tract.

Nathan
Brown said he bought his home on Watson Drive six-and-a-half years ago. He was
the second homeowner to move onto that street. “I lived in Jackson all my life.
… I am Jackson through and through. … I am for Jackson residential and
commercial expansion,” he said. “I am all about growth, and I believe in it; if
we’re not growing, we’re going backwards. That being said, I am completely
against what could come from changing this from R-2 to R-4.”

Brown
and two other residents expressed concern over increased traffic on an already
narrow Ridge Road, the possible drop in property values and possible increases
in crime if apartments were built nearby.

Derrick
Geringer, one of the owners of the tract of land, said he framed in or built
the homes that those Bent Creek homeowners are now living in. His plans were to
extend Ridge Road through the tract, ending in a cul-de-sac and build seven or
eight duplexes similar to those on Watson Drive. These duplexes will not be
cheap to build; they will cost roughly $200,000 each, which should not hurt
property values.

Geringer
plans to keep ownership of the new duplexes and rent them out.

He
said traffic is going to increase some, no matter what ends up being built on
the property. The portion of Ridge Road that extends into the tract of land
will have sidewalks. That should make walking in the neighborhood a little
safer.

Whitney
O’Daniel, a resident who lives on Ridge Road, shared the concerns of other
residents. In addition, he wondered why the original application was to go from
R-2 to commercial and why the Planning and Zoning Commission recommended going
to R-4, but the commission opted not to have a public hearing of its own. Many
neighboring homeowners did not know about the planned development until they
were notified about this public hearing. Some had gotten wind earlier, and they
had gone through the neighborhood collecting signatures opposing the zoning
change.

O’Daniel also said
the City’s long-range plan emphasized a desire on the City’s part for
owner-occupied homes. He wondered what good was the plan if it wasn’t followed.
The proposed duplexes would not be owner-occupied but would be rentals.

The Board of Aldermen
later tabled the vote until the next meeting (March 1) and discussed the matter
further during study session.

Several aldermen said
they would not vote for rezoning the tract to R-4 because that opened the door
for apartments to be built and the neighbors objected to that. They would be in
favor of amending the application from R-4 to R-3 (one-and-two family
residential). R-3 would allow for duplexes but would not allow apartments.

At the March 1
meeting, the aldermen will vote to take the matter “off the table” and will
then have the option to amend the request from R-4 to R-3. They will then set
another public hearing for April 5. Following that public hearing, the aldermen
could vote on the amended zoning request at the same meeting.

Geringer said he is
not opposed to amending his request from R-4 to R-3.

• Stormwater: No one from the public spoke at a public hearing that was
held to satisfy the requirements of the state-mandated Municipal Separate Storm
Sewer System Permit which focuses on the management of stormwater as required
by the Missouri Department of Natural Resources.

During study session,
the Board was updated on an engineering services proposal for the Municipal
Separate Storm Sewer System Program from Garry Aronberg of H.R. Green.

The engineering firm
will look at city ordinances to make sure they are consistent with the
stormwater plan and will study stormwater facilities, getting a preliminary
inventory,  and then look for ways to
fund improvements.

The Board will vote
on the proposal at its next meeting.

• Park Day: The Board of Aldermen set Saturday, April 24, as the annual
Park Day, beginning at 8 a.m. at Pavilion No. 1.

• Natural gas
agreement: The Board approved a
franchise agreement with Liberty Utilities for natural gas supply and
distribution within the City of Jackson.

• Budget amendment: The Board amended the 2021 City of Jackson annual budget to
reflect amended end of year balances.

• February Annual: During study session, the Board gave “head nod” approval to
the UJRO to hold its February Annual on Saturday, Feb. 27, in Uptown Jackson.
There will be no street closures, but several parking spots will be needed for
food trucks.

• East Main Street
improvements: City Engineer Clint
Brown clarified comments that had been made at an earlier Board of Aldermen
meeting regarding improvements planned for East Main Street at the railroad
crossing near Co-Op. The entire project
will take two to three months to complete. The project includes improving the
storm-water system, installing a new water line and removing the railroad
tracks. The actual street closure will only be for four weeks if there is a
complete street closure  or eight weeks
if there is a partial closure with one lane left open.

If given a green
light to begin now, the project could be completed before school starts in
August.

Rather than rush the
project and have it go on at the same time as the Diverging Diamond Interchange
at I-55 and East Jackson Boulevard (which diverts some traffic onto East Main
Street), it was decided to proceed with making plans but delay actual
construction until fall, when the DDI work is completed. The East Main Street
project could still be completed before the end of the year.

• Driveways: In study session, the Board was informed that the city code
requires anyone wanting to build a driveway across a city sidewalk to come
before the Board of Aldermen for approval. This has not been the practice, and
no one wants it to be. (The applicants simply get a building permit.)
Therefore, a resolution for an amended city ordinance changing this requirement
will be brought to the Board for its approval at a future meeting.

• Sign for Civic
Center: In study session, the Board
discussed having a digital message board installed on Deerwood Drive to
advertise Civic Center (and other) events, similar to the sign installed on
Jackson High School property along West Jackson Boulevard. The Board will
consider approving a resolution at its next meeting that will allow this
proposed sign, which will not fall within the requirements of the sign ordinance.