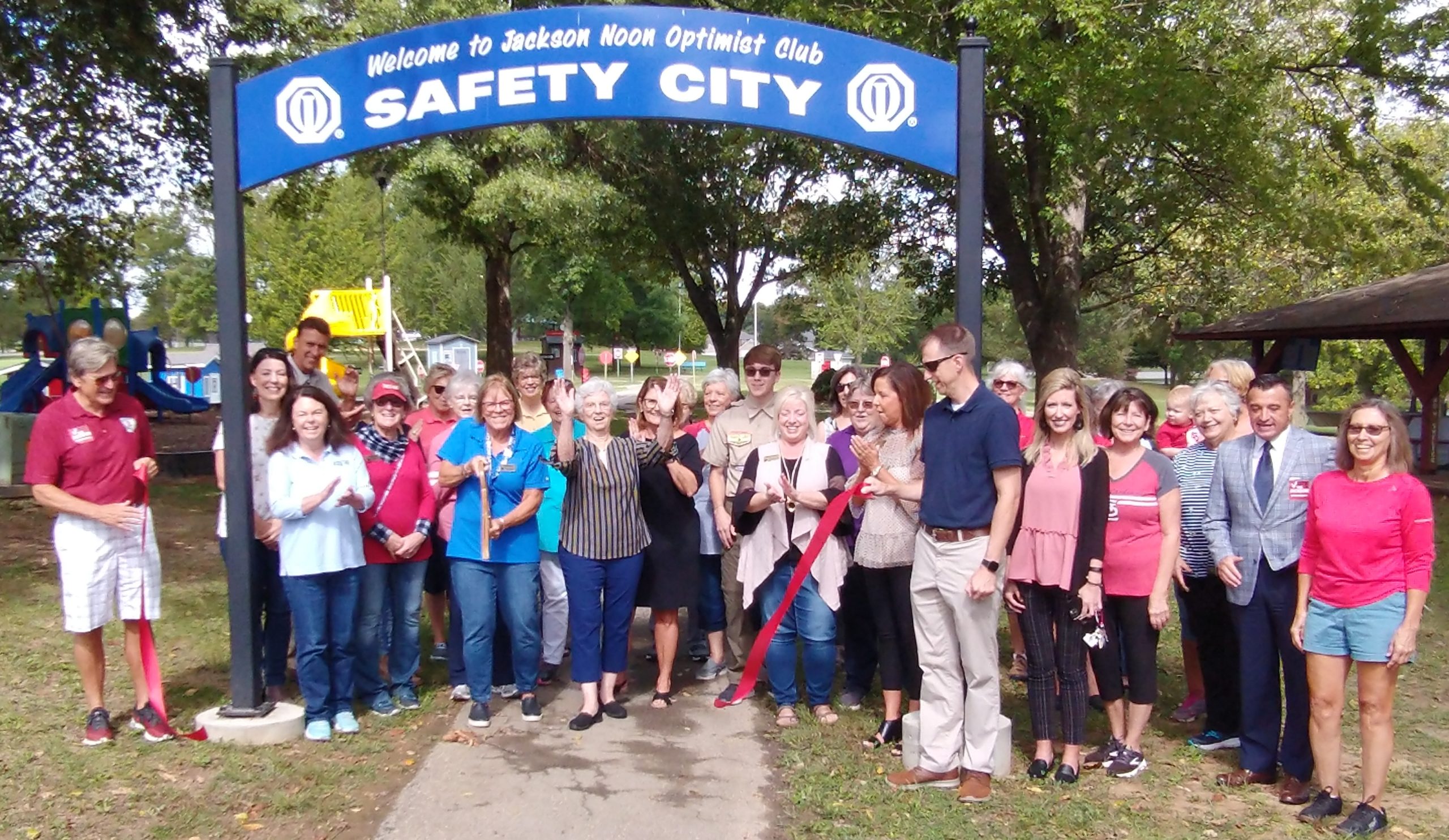 Susan Hahs, with Beverly Nelson cheering by her side, snipped the ribbon to officially reopen the refurbished Safety City in Jackson City Park Oct. 6. Hahs is the Noon Optimist Safety City chairwoman. Photo by Gregory Dullum

Thirty years after it was conceived, that tiny little town with miniature buildings and roads — just the right size for trikes, bikes and scooters — has been refurbished and celebrated a grand reopening with a ribbon cutting.

Hahs described the history of the project.

In 1991, Noon Optimist Member Beverly Nelson returned from vacation with an idea she had seen. She presented the idea of creating Safety City to the newly chartered Optimist Club and club President Geneva Hartle.

It took two years to get all the designs, construction materials, businesses and labor together to complete Safety City for its dedication in March 1992. At that time, Marci Thompson was the Optimist president.

Chili suppers were held and a grant was received to raise the initial funds necessary to begin. Many hours were volunteered by numerous community people and companies. Close to $25,000 in materials and labor were donated.

Volunteers laid out 1,300 feet of a miniature roadway with traffic signs and buildings to replicate a small village. They built five buildings: a fire station, a police station, a chapel, a city hall, and a library. Nelson recalled that there were so many people who helped volunteer on a Saturday when the concrete was poured for the Safety City roads, that work was done by 11 a.m. The Optimists had planned a barbecue to feed the volunteers, and the work was done before the food was prepared.

Many union concrete workers came from Perryville to finish the concrete. “It was like little ants all over the place out there,” she said. “It was amazing.”

In 1993, free safety training classes for kindergarten through third grade children were held on Saturday mornings. The kids were taught bike safety and pedestrian safety by a police officer and a club member. Each participant received a bike helmet, t-shirt and safety-related information. The club provided bicycles for them to practice what they had learned in these sessions.

By 2011, there were four classes with more than 200 children participating. Sessions were later cancelled because of lack of participation and funding.

“The most fun part was the classes and dealing with the kids,” Nelson recalled. They used to put raw eggs in toy convertibles and roll them down a ramp into a brick wall to show the importance of wearing seat belts. One egg was taped into the seat and the other was loose. The loose egg usually flipped out and broke. But once, when a local TV station was filming the class, the tape that represented the seat belt tore loose and that egg splattered all over. “That took a lot of explaining to the kids,” Nelson said.

Now, 30 years after its conception, the Optimists have revamped and updated Safety City. Overgrown trees and bushes were trimmed or removed. All six buildings — which now include a fire station, a police station, a chapel, a bank, a train depot and a school — have been touched in some way. The train depot was completely torn down and rebuilt by Dylan Webber, a Boy Scout in Jackson’s Troop 210. He used this project to earn his Eagle Scout badge.

A roundabout was added last summer. Traffic signs have been added and updated. All the benches that surround Safety City have been brightly painted. A new entrance sign welcoming people to Safety City was added last year with the help of many businesses and people. A white cherry tree was planted in honor of the rededication ceremony.

The optimists wish to thank everyone who has contributed in some way to Safety City a success.

For the last 30 years there have been many children that have learned to ride the bicycles, tricycles, big wheels, roller blades, etc. on the miniature village streets. With the revamping, it is hoped that children can continue to use it for another 30 years.