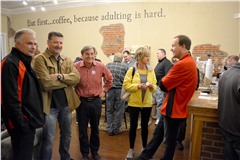 Voters in the City of Jackson overwhelmingly approved a request to add a 1/2-cent to their sales tax to fund improvements to public safety in Tuesday’s election.

The measure is expected to generate about $1 million in revenue per year. That will be used to pay for four to five police patrol officers, a fire department training officer, and equipment for the police and fire departments.

With passage of the measure, the City will go ahead with plans to construct a new police station and municipal court, which will be built next to the current police and fire complex. The existing building will be remodeled, and the fire department will expand to take over the entire old building.

The measure increases sales tax within the City of Jackson by 1/2 cent. The new sales tax rate, 7.225 percent, is still lower than that of neighboring cities.

“I’m grateful that the citizens supported the police and fire departments like I knew they would, and they came out in force,” Mayor Dwain Hahs said after the election results came in Tuesday night. “Now we’ll make a great investment in our city going forward to keep Jackson safe.”

Hahs said the city will start the process of bidding out the new police station project, and he hopes they will begin construction in 2018.

“The tax starts collecting in July, so we’ll start seeing funds from that by the end of the year,” Hahs said.

Hahs released the following written statement on Wednesday morning: “Keeping Jackson safe is our highest priority. We’re proud to live in a community with residents who understand and support that priority, especially as our city continues its current trajectory of growth and improvement. The passage of the 1/2 cent sales tax will allow the City of Jackson to move forward with critical improvements to our public safety, ensuring we remain proactive in our efforts and that we maintain the quality of life factors we all value.”

“I thank our voting constituents for taking time to learn about these public safety needs and supporting the City, alongside our police and fire departments, in addressing those needs. Thanks also goes to the Board of Aldermen for their commitment to keeping Jackson safe, strong and growing.”

“I’m extremely pleased, extremely thankful and extremely excited,” Police Chief James Humphreys said. “The community stepped up and really came through. It takes a team effort and partnership between the community and the police and fire departments to keep the City safe.”

“The community support and the way they showed it through the vote is why I like to work in this community,” said Fire Chief Jason Mouser. “We’re looking forward to getting this started.”

In the Oak Ridge R-6 School Board race, incumbent Robert Grayhek garnered the most votes (238) to earn one of the seats. George Below edged out incumbent Jeff Hahs to take the second seat. Below garnered 163 votes (29.21 percent) while Hahs received 152 (27.24 percent).

Bob Fox ran unopposed as mayor, and was elected to replace Harry Rediger, who did not run because of term limits.

Rocky King ran unopposed and was elected mayor of Delta. Dennis Lesch and Janie Kirkpatrick were the only candidates for the two Delta aldermen positions and were elected. Kirkpatrick received 33 votes and Lesch received 25 votes.