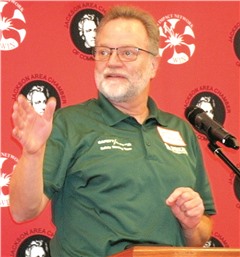 Missouri currently has the seventh largest highway system in the U.S. and has the sixth largest bridge inventory, but it has the second lowest gas tax in the country.

The current gas tax was set by voters in 1996, when gas cost only $1.08 a gallon. Although gas prices have risen to $2.70 in some parts of Missouri, the gas tax has remained the same.

Rosenbarger spoke in favor of Proposition D, a measure on the Nov. 6 ballot that will raise gas taxes in Missouri by  2.5¢ per year for four years until it gets to 10¢ per gallon.

When fully funded, the measure will generate $412 million in new money. Of that, 30 percent will go to cities and counties. Cape Girardeau County will see an additional income of $1.4 million every year. Jackson will receive an additional $216,000 a year. The remaining $288 million will go into the state road fund, which helps fund the Highway Patrol and pays for construction  and maintenance of our roads and bridges.

In addition to these roads, the state also maintains 97,000 miles of local roads and 14,000 local bridges.

The cost to Missouri drivers will be relatively small, Rosenbarger said. Based upon the average Missouri driver traveling 13,500 miles a year and the average car getting 22 miles to the gallon, the average motorists buys 600 gallons of fuel a year. The additional cost would be 10¢ per gallon, or $60 per year (just $5 per month).

If the measure passes, Missouri will rise from the bottom (ranked 49th in gas tax) to middle of the pack. Rosenbarger said 31¢ is the average state gas tax. Proposition D will raise Missouri’s gas tax to 27¢, still below the average. “Twenty-eight states will still be higher,” he said.