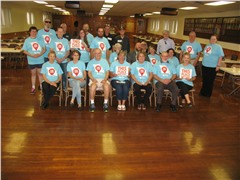 Representatives of MissouriMainStreetConnection came to Jackson May 15 as part of a 13-stop road trip celebrating Preservation Month.

About 30 people gathered at American Legion Post 158 to hear about preservation efforts to restore the World War I Memorial Doughboy statue on the courthouse lawn. In addition, Carla Jordan, director of the Cape Girardeau County History Center in Uptown Jackson, spoke about preserving small town America.

The Doughboy is a 16-foot-tall white marble statue of a World War I soldier that was put on display in 1925. It bears a bronze plaque with the names of 40 veterans from Cape Girardeau County who gave their lives in the course of the war. Over the years, the statue has deteriorated.

“A year ago, the American Legion Post here in Jackson, [Post] 158 stepped up and assumed the mission to remember our forefathers and those who did not return home from the Great War — the war of 100 years ago,” said retired U.S. Navy Commander Lawson Burgfeld. “The challenge for us was to refurbish the World War I Doughboy Statue in Courthouse Square.”

Congress authorized matching grants to refurbish 100 World War I memorials in 100 cities nationwide. Jackson received one of the grants.

Liley Monument Co. was hired to refurbish the monument. “They could not restore the face,” Dave Hitt told The Cash-Book Journal. However, the company was able to clean the statue and bronze plaque, and add a second plaque with seven additional names of veterans who were overlooked in 1925.

Burgfeld has been working on constructing brief biographies of the veterans whose names are on the statue. Of the original 40 names, at least 15 died of wounds received in action. Five were African Americans and two were women.

The Altenthal-Joerns Post 158 of the American Legion in Jackson is named after two of the men on the plaque: Clarence Altenthal and Clark Joerns; both were from Jackson.

“Ben Eggers was another Jackson boy,” Burgfeld said. “He was the last Cape Girardeau County soldier killed in the war, six days before the Armistice.”

“Preservation of culture is a lot of what I do,” said Carla Jordan. “But I want to talk tonight about preservation in Jackson. In my opinion, I believe without any hesitation, that Jackson, MO, has the best stuff going on in preservation of any community of this size that I’ve ever seen. There is a heart and a spirit here. I call it ‘1952.’

“[In most places] you don’t tend to support preservation efforts in your own home town. You should. But this is an exception to that.” Jordan praised the local community’s support of the Historic District in Uptown Jackson.

“There may have been a time when preservation was about saving an old building here or there. But those days are kind of gone. Preservation is in the business of saving communities and the values they embody. In other words, we’d better be historic preservationists or we are going to lose small town Mid-America,” Jordan said.

Jackson’s Historic District is a draw for tourism. This is the third year that busloads of tourists from the American Queen and American Dutchess riverboats that dock in Cape will come to Jackson. There are at least four tours scheduled to come this year.

The riverboat passengers are asked to rate the tours. “What we get the best scores on are our shops and boutiques.” Jordan said.