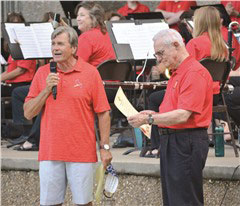 When the last note is played and the applause dies down at the Nick Leist Band Shell in City Park tomorrow night (Aug. 6), The Jackson Muny Band will conclude its 100th year of existence.

“This year we are celebrating 100 years of the Municipal Band,” Director Scott Vangilder told The Cash-Book Journal. Big plans were made to make this year special, but they came crashing down as the COVID-19 pandemic spread across the state. “All our big celebrations have been cancelled,” Vangilder added.

Five years ago—long before anyone had ever heard of the coronavirus — the Muny Band commissioned a piece of music to honor the centennial of its existence.

The Muny Band hoped to premier the piece in June at the Missouri Band Masters Association Convention at the Lake of the Ozarks, with Gillingham in the audience. The convention was cancelled and the premier has been postponed to next year’s convention. (For more about this song, see story on page 7.)

While the premier was put on hold until next year, some parts of the centennial celebration went on as scheduled. The band went ahead with its concert series this summer in Jackson City Park. The venue is outdoors and people could socially distance themselves.

A city proclamation was read by Mayor Dwain Hahs at the July 23 band concert. It named the week of July 20, 2020, as Jackson Municipal Band Week to celebrate the band’s 100th year.

This municipal band is a great asset,” Hahs said. “It’s really a gem of our community and I’d like to congratulate the Jackson Municipal Band – all their members and certainly the board of directors – for all the effort that they put forward every year to make sure that we have this gem in our community.”

A hundred years ago, this gem did not exist. But there was a man named Albert Roloff who had a general store. Roloff and his children were musically inclined and played in many different venues.

According to Vangilder, the Jackson mayor approached A.W. Roloff in 1920 with the idea of starting a municipal band. This started the wheels in motion.

On June 3, 1921, Roloff attended a meeting at the courthouse where the Chamber of Commerce was formed. The chairman of the Chamber’s executive board appointed a committee to see “what could be done to organize and maintain a band for Jackson.” Roloff was on that executive board (Missouri Cash-Book, June 9, 1921).

“Now that the community wanted its own band for patriotic and special events, the best man had been appointed to get the job done … none other than Jackson’s Music Man, A.W. Roloff” (“A.W. Roloff: Community leader and Jackson’s music man” part 2 by Beverly Hahs, The Cash-Book Journal, July 27, 2016, p. 6A).

“Gathering up 29 young men he knew he could teach, the to-be bandmaster started practices in a wood shed behind the Roloff home on Cherry St.” (ibid.).

The first two musical selections rehearsed were a march, “Captain,” and a waltz, “Rustling Leaves.” The first public performance was on Nov. 11, 1921.

Originally called the Jackson Junior Band, the group changed its name to the Jackson Municipal Band in 1935.

The first engagement for a parade was the Memorial Day picnic in May 1922 in Cape Girardeau.

The first performance where individual band members received pay was the five-day concert at Homecomers in 1922. Each member received $5.

In 1930, Jackson residents passed a special tax levy to build a bandstand on the courthouse lawn. The gazebo was completed in 1932 at a cost of $1,300. It served as a stage for the group until July 1976, when the current band shell in City Park was dedicated.

Jackson is one of a few Missouri towns where a tax levy is maintained to help support its municipal band.

Early on, the band could not afford uniforms, so members wore white shirts, white trousers and black ties. In 1938, uniforms were purchased with red coats, black trousers and Sam Browne belts.