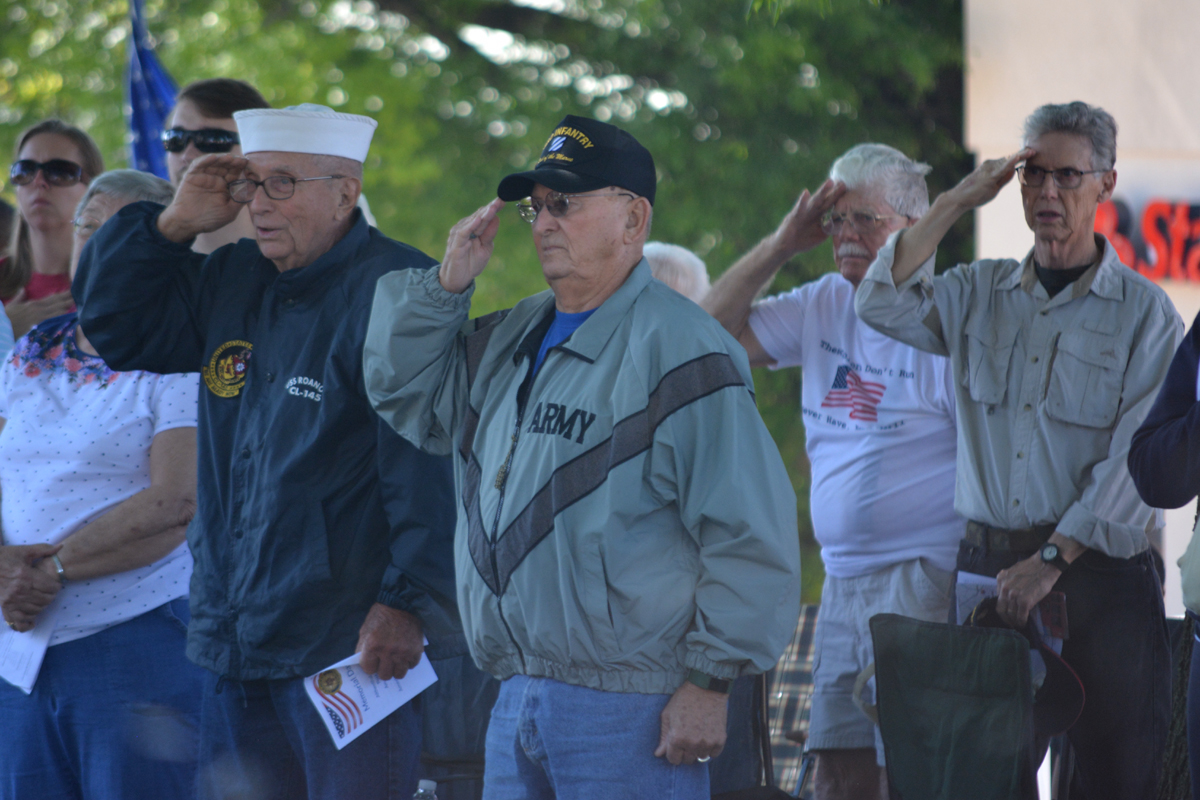 Veterans salute the flag while the national anthem is played at the VFW Memorial Day program in Jackson on May 31. Photos by Jay Forness

The Althenthal-Joerns Post 158 American Legion and American Legion Auxiliary honored those who lost their lives serving this country during its Memorial Day event on May 31 at the courthouse lawn in Jackson.

The 9 a.m. event started with a patriotic music concert from the Jackson Municipal Band, who also played the national anthem and “Taps” during the ceremony. 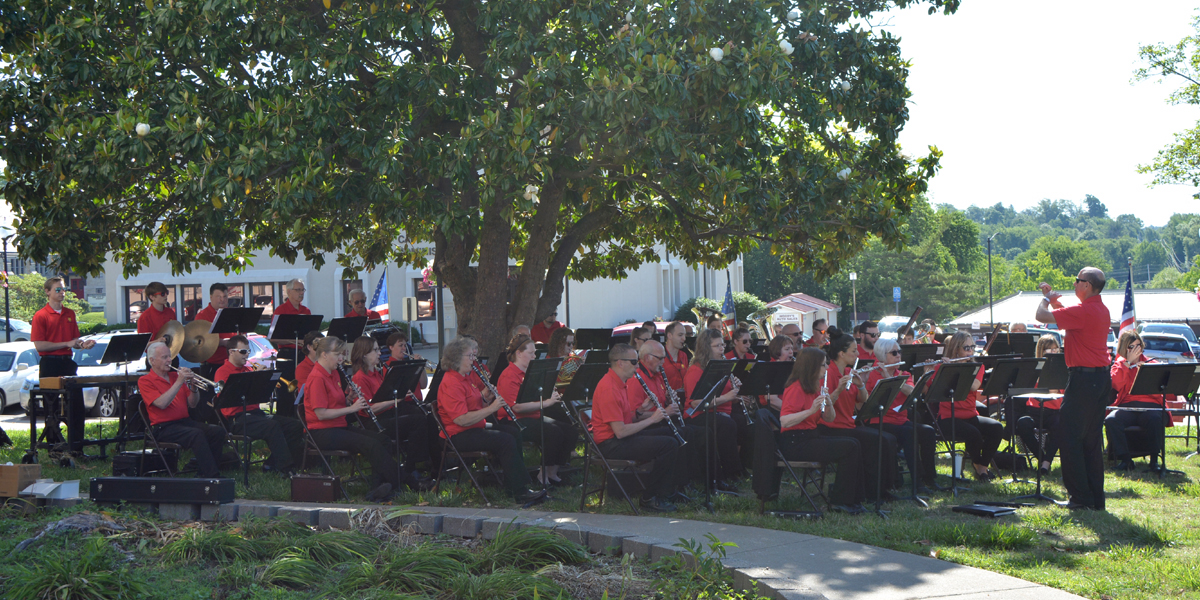 The Jackson Municipal Band performed during the Memorial Day American Legion program on May 31.

The guest speaker was Kelly Waller, a Jackson native and Air Force veteran who served as an Avionic/Navigation Systems Specialist on C-5s, C-130s and C-141Bs at Norton Air Force Base in San Bernardino, CA.

In addition to honoring veterans who died in service, the ceremony also highlighted the relationship between the American Legion Post and the Jackson School District.

Waller, who owns Kelly Waller Insurance Agency of American Family Insurance in Jackson, serves on the Jackson R-2 School Board and was president of the Board for four years.

“We are very proud to have an affiliation with the Legion and veterans in this area,” Waller said. “I can tell you, at Jackson, we are going to try to make sure that we continue that.” 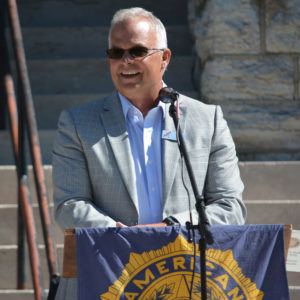 Air Force Veteran and Past President of the Jackson R-2 School Board Kelly Waller was this year’s guest speaker at the Memorial Day program.

He said in addition to the various events at the schools that include Legion members, many students take on service projects that honor the flag and veterans.

“Whether you are a kindergartener saying the Pledge of Allegiance or a high school senior handing a flower to a veteran at the ceremony, you may not even know what it means to say ‘thank you for your service,’ but someday you will,” Waller said.

Waller said it was a huge honor to be able to speak in front of people he has known his entire life and signing up for the Air Force got him on the path to where he started his career and started his family.

He said without the sacrifices of those who served our county, the public school system wouldn’t operate the same and gatherings like the Memorial Day program wouldn’t be possible.

“I am thankful to honor the folks that gave it all, and I promise you that at Jackson, we will continue to do what we need to do to keep that message moving forward,” Waller said.

While saying “I am done with COVID,” Waller said he was grateful to the District’s teachers and support staff, as well as the Cape Girardeau County Public Health Center, for their work over the past year to keep the schools open.

“We were in school when other schools didn’t even start until May,” Waller said. “Cape Girardeau County Health gave us enough of a crack in here to use common sense and get through it. Nobody likes the mask, but our teachers made it work.” 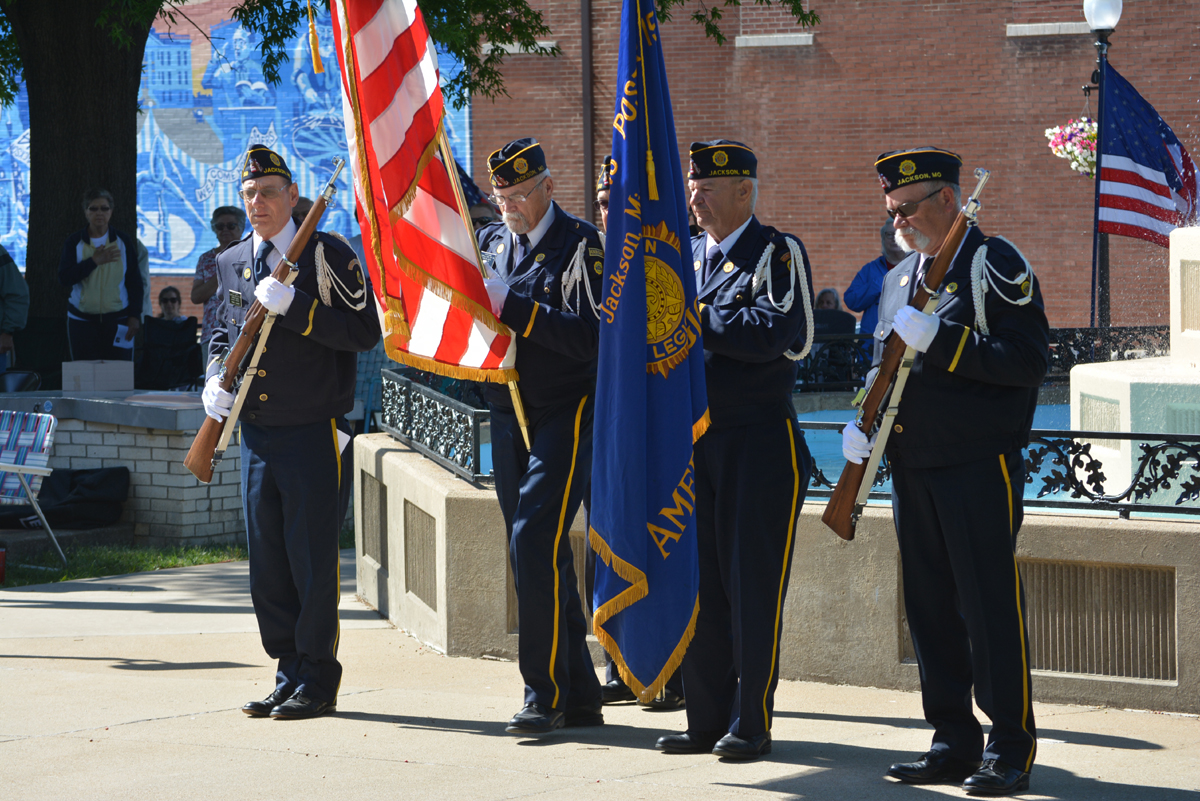 The American Legion Post 158 Color Guard bring up the flag during the Jackson Memorial Day program in the courthouse lawn on May 31.

A POW/MIA cover was placed on an empty chair as a rededication in the endeavor to secure the release of all American prisoners from captivity, the repatriation of the remains of those who died on foreign soil and a full accounting of all those missing.

The names of the Jackson, Saxony Lutheran and Oak Ridge 2021 graduates who have enlisted in the military were also read during the ceremony.