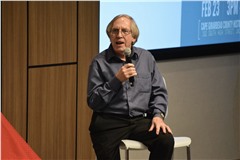 Crowds came to Uptown Jackson on Saturday, Feb. 23, to meet Roy Thomas, a Jackson native who has made a career in comic books as a writer and editor for Marvel and DC Comics.

Thomas succeeded Stan Lee as editor-in-chief of Marvel Comics, becoming the second to ever hold that position. He also followed Lee’s footsteps, writing the first Spider-Man comics not written by Lee himself.

He also did work for DC Comics, including Thomas’ favorite comic he worked on — All-Star Squadron. In the 1981 comic, all of DC’s superheroes team up to help win World War II.

Thomas was also presented a letter from current Marvel Comics editor-in-chief C.B. Cebulski, saying everyone at Marvel was ecstatic to hear that Jackson was honoring Thomas for “his prolific pop culture contributions.”

“Roy’s writing, his leadership and his spirit continue to resonate around the halls of Marvel to this day,” Cebulski’s letter states. “He is a legend we still look to for guidance and inspiration!”

Thomas spoke to a sold-out crowd at the Montgomery Bank Conference and Training Center in Jackson about his career and his time in Jackson. Many of those in attendance knew Thomas from when he lived in Jackson.

“Every time I came back, I had more trouble navigating the streets,” Thomas said about returning to Jackson. He joked about the addition of the roundabout and the changed traffic flow around the courthouse.

Thomas attended St. Paul Lutheran School, Jackson High School and Southeast Missouri State University. During his time in Jackson as a child, he remembered a comic book burning where he would throw in comics he had already read and hadn’t liked as much.

“I dumped them on, kind of sad, but at least they were things I’d read, and then I spotted two comic books in the pile that I hadn’t seen before.” Thomas said the comics were called Space Busters and Wild Boy of the Congo. “So I swiped them. I’m the only person who came home from a comic book burning with two new comic books.”

Thomas said that he never would have thought that anyone over the age of 12 would care about comics. He added that he would have also created more characters if he had known about how big the Marvel characters have become.

After his presentation, Thomas met with fans at the history center from 3 to 8 p.m. The line for the meet and greet ran through the building, with even more people waiting outside to get into the history center.

UJRO board member Craig Milde said this was “the most impactful February Annual so far,” with more activities in the area than ever before.

As part of the event, several storefronts in Uptown Jackson were decorated with displays of comic book characters and other artwork celebrating Thomas’ life and career. Some of the artwork displayed were created by Jackson High School and Southeast Missouri State University students.

A pop-up comic book shop by Ken Murphy was held on High Street, including comics written and edited by Thomas. The shops on High Street were also open and giving away superhero trading cards.

Thomas, who now lives in South Carolina, is currently the editor of Alter Ego magazine, which looks at the Golden Age and Silver Age of comic books from the 1930s through the 1960s.