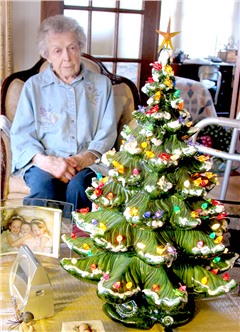 “It started about last Christmas when I lost my eyesight,” 81-year-old Jackson resident Mary Molyers said, who can see very little and is legally blind because of macular degeneration.

Molyers had hired Laura Hopkins, the daughter of a best friend, to do housework for her. Hopkins took advantage of Molyers’ disabilities and began stealing.

First she stole money, and then she allegedly began taking items from the house, including almost all of Molyers’ Christmas decorations she had collected over her lifetime.

“She stole this Christmas from me, and all the Christmases since my boys were small,” Molyers said.

When Molyers received a new magnifying glass with a built-in light, she used it to look at her checkbook and was shocked by what she saw.

Molyers called Hopkins and questioned her about it. Hopkins had no answer, but she said she would do extra work to pay it back.

“She had written a whole lot of checks. Three times a week.” The illegal checks added up to more than $6,000, Molyers said.

Molyers’ grown sons reported the theft to the police. Hopkins was arrested and charged.

Hopkins admitted guilt and said she stole the money to pay doctors’ bills, according to Molyers. “That was the reason she gave. I never thought Laura would do anything like that. I based it upon my friendship with her mother. It makes you wonder who you can trust. Older people need to realize how many people there are out there who would steal their stuff — and their medicine.” (Molyers added that she had caught a previous cleaning woman stealing her pain medicine.)

Hopkins pled guilty to stealing from Molyers in a plea bargain. “The case never went to trial,” Molyers said. Hopkins was ordered to pay $3,000 in restitution; $1,650 by Christmas and then $100 a month after that until the remainder is paid off. The case concluded a couple of weeks ago.

After the case was concluded, Molyers began noticing that things were missing from her home.

First she discovered missing earrings and necklaces she had bought for her granddaughters. They disappeared from a bedroom drawer.

Other jewelry of hers that she planned to give to her daughters someday also was discovered missing. “She took all my prettiest earrings,” Molyers mourned. “She took everything she wanted and left the rest for me. They all meant a lot.”

A large metal yellow and orange cat from Mexico disappeared from a hallway table. Other items were placed on the hallway table to hide the missing cat. “If she sold that cat, there aren’t many like that around,” Molyers said.

A first-edition Thomas Kincaid plate was taken from a display case and other items were rearranged to hide its disappearance.

A fancy lace tablecloth that Molyers bought on a cruise was one she planned to use at Christmas. It has sentimental value, but it can’t be found.

Molyers saw Hopkins take boxes out of her house and was told they were going to be stored in the garage. Molyers now believes Hop-kins put them in the garage only until she could put them in her truck and take them home. They are gone from the garage, Molyers said.

“She took almost all my Christmas things,” Molyers alleges. “I don’t have any Christmas stuff except a little tree in there,” she said, pointing to her living room. Molyers once had a lot of Christmas decorations; little lighted houses and “all kinds of things,” she said. “I had lots and lots of tree ornaments. I don’t have any anymore. It’s a lot of memories, and they’re all gone.”

“I have a feeling she kept most of the Christmas things,” Molyers said. “She told me she just loved Christmas stuff. I guess she did, because she took it all,” she claimed.

Molyers called Hopkins on the phone and left a message, asking her to bring back the Christmas decorations.

She also has tried calling her old friend, Hopkins’ mother, hoping she would help. “Now her mother won’t speak to me and hangs up on me, like it’s my fault Laura did this to me,” Molyers said. “I’m just very hurt.”

Neighbors have told Mol-yers to forget about what has been stolen and move on with her life. “Everyone tells me to forget about it. I’ll never get it [the stolen stuff] back,” she said.

She has contacted an attorney and will meet with him next week to see if he can do anything.

“I’m very hurt and feel like no one cares. People ought to know things like this are going on in our community,” Molyers said.

The Cape County Prosecuting Attorney’s Office told the CBJ that if these items were indeed stolen, a new report needs to be made to the Jackson Police Department, and new charges could be filed.