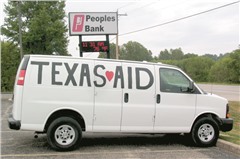 Hurricane Harvey recently attacked Houston, TX, with a vengeance! Instead of moving inland as hurricanes usually do, Harvey hovered over Houston, dropping unprecedented rainfall that has caused horrific flooding in that area.

Although Harvey’s high winds and heavy rains never reached Jackson, our city has not been untouched by the storm. Moved by compassion, this area has reacted by sending aid to victims of the flooding.

Jackson Fire and Rescue has two members of a Regional Technical Rescue Team (along with members from Cape Girardeau and Sikeston) who have been called to duty.

“We sent two guys down [to Houston] Wednesday night,” Fire Chief Jason Mouser said Friday. “They left Jackson at 6:30 and met up with the Cape guys and loaded up their supplies. They left Cape at 8 p.m.”

Their convoy included Cape trucks, several boats, and a group of rescuers from Kansas City.

“The team arrived in College Station, 90 miles northwest of Houston after 10 a.m. Thursday. On Friday morning they were stationed at Fort Bend County fairgrounds in Rosenberg, a staging area juts west of Houston, awaiting their assignments.

“All were eager to help out,” Mouser said. The men train once a month and were ready to put their training to use.

A total of 56 Missourians representing 18 different fire and ambulance departments were deployed to Texas to assist with swift water rescue operations, in response to an Emergency Management Assistance Compact (EMAC) request from the state of Texas.

“I am proud of the work our Missouri responders are doing to save lives and assist our fellow Americans in Texas,” Gov. Eric Greitens said. “Those of us at home send our prayers to the survivors of Hurricane Harvey and all of the first responders who are risking their own safety to protect others.”

Meanwhile, we who live here and don’t have training can help out in our own way.

Tom Armbruster of Cape Auto sales and A&A Rentals in Cape Girardeau has placed six of his white vans in Jackson and in other areas to collect items to be sent to Houston. The white vans have a large “TEXAS AID” on their sides.

One van was parked in front of Peoples Bank on Highway 61 N. late last week.

Bank President Matthew Puchbauer said he was asked last Wednesday morning to allow the van to sit in his lot for a few days. Area residents could stop and put in cleaning supplies to be sent to Texas. “I think it’s a very good idea,” Puchbauer said.

Melinda Hemmann, a rental agent for Armbruster, is heading up the campaign to collect supplies.

She said last Thursday that in addition to the van at Peoples Bank, two were parked at Connection Point Church in Jackson, one at Walmart and at Schnucks in Cape, and one in Kennett.

One man bought a whole pallet of drinking water from the Walmart and filled a van with it.

The supplies collected through the long Labor Day weekend were scheduled to be taken to Texas yesterday (Tuesday) morning.

“Tuesday at 6 a.m. we’ll pull out and take all these supplies,” said Hemmann.

The collection, however,  will continue. If you can’t find any local vans, there will be one at Armbruster’s business, 1238 Meadowbrook Ln. in Cape.

“This is an ongoing effort,” said Hemmann. “People can still bring supplies to our offices. We have 300 vehicles, and we’d like to load every one of them and take them down.”

In 1997, Armbruster conducted a similar aid campaign for victims of Hurricane Katrina. At that time, he sent 97 truckloads to Gulf Port, MS, and stayed there three months to help out.

If you wish to donate items for flood relief, look for the van marked “Texas Aid” and place items in the van. Money is not being accepted.

Missourians have already made a difference in the flood area.

Missouri Task Force 1, an urban search and rescue team with swift water rescue capabilities that has been in Texas since Aug. 25, had through last Wednesday completed the rescue of more than 375 people and over 35 pets.

Planning is underway to provide additional support, if requested, for a wide-range of missions, including transportation, engineer support, security and medical response capabilities.