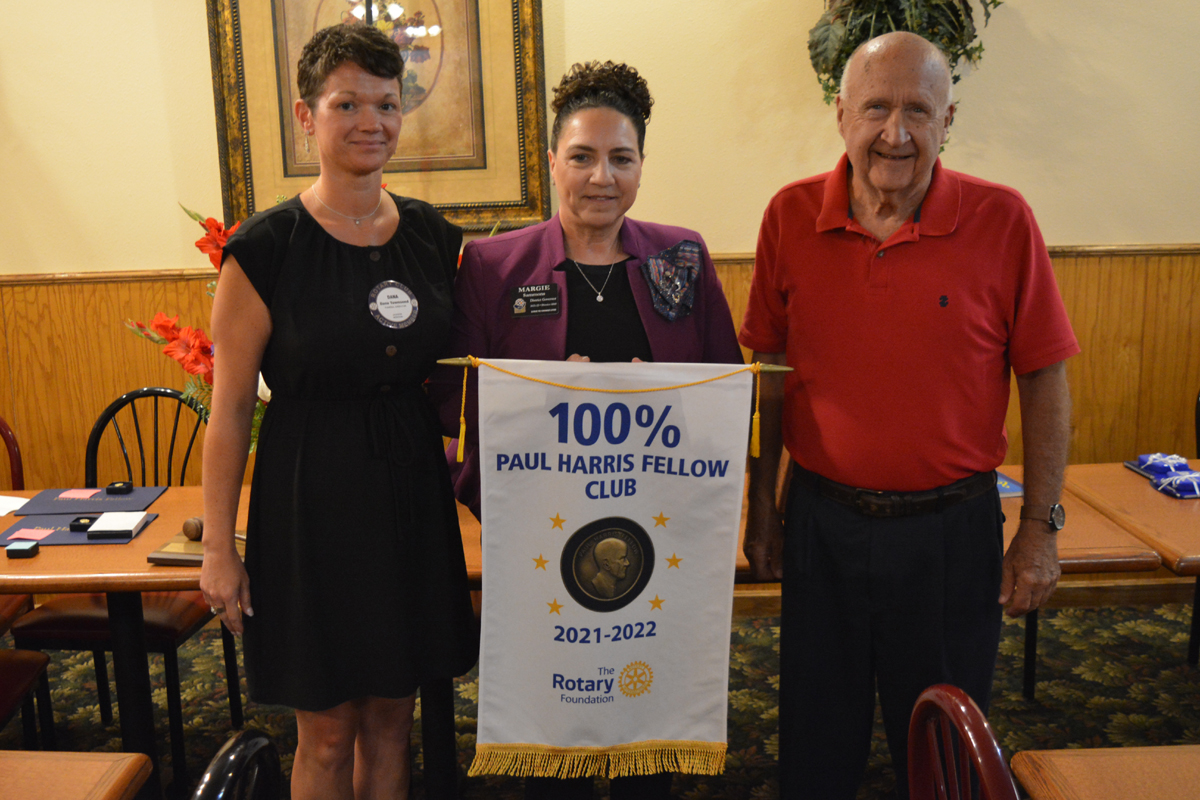 To receive the Paul Harris Fellow recognition, an individual must contribute or raise $1,000 to the Rotary Foundation. As of this year, all 36 active members of the Jackson Rotary Club have received this award.

“It is quite an honor and not every club is able to do this,” Sammons said, adding that the Jackson club is only the 11th club in the history of their district that has achieved this recognition.

The honor is named after Paul Harris, who founded the first Rotary Club in 1905 and worked to expand the service organization beyond its roots in Chicago, IL. More than one million people have received the Paul Harris Fellow award since it was established in 1957.

“Those that become Paul Harris Fellows are those who are very similar and have the characteristics of our founder Paul Harris,” Sammons said. “It’s a very prestigious award held very high in regards – not just locally among Rotarians, but around the world.”

Sammons said Paul Harris Fellows have helped the humanitarian organization live by its motto of putting service over self by funding many projects organized by the Rotary Foundation.

“The money is so valuable – they fund water wells, literacy programs, eye surgeries, cardiac surgeries, as well as eradicating polio – which is very close to being fully accomplished,” Sammons said. “There is so much good that money does around the world.”

During the award ceremony, Dana Townsend was recognized as Rotarian of the Year for her efforts as president of the Jackson Rotary Club for the past two years.

Incoming president Keenan Kinder, who was sworn in during the meeting, thanked Thompson for her leadership over the past two years for the club. “It’s been great being a part of this club and making the friends that I have,” Thompson said. “I don’t plan on going anywhere.”

Brad Kasten was recognized for his work as the foundation chair for the Jackson Rotary Club and helping the club reach the 100% Paul Harris Fellow achievement.

“For many years he was in charge of the foundation,” Townsend said. “Ever since I have been in the club, he has always been welcoming and a great leader.”

In addition to holding the foundation chair position for the club, Kasten has previously served as the assistant governor for Rotary District 6060.

Brad Kasten said he has been a member of the club for almost 15 years. “It’s been the experience of my life,” Kasten said. “This type of club is right up my alley with a lot of friendly people.”

“She has been a great leader for the Interact Club,” Jackson Rotary Club Board Member Matt Lacy, who presented the award, said. “She’s a very driven person and is very community based.”

Pipkin graduated as valedictorian of the JHS Class of 2022 and plans on continuing her education at Missouri S&T in Rolla.

Kyle Mabuce, a social studies teacher at Jackson Junior High School, was awarded the Rotary club’s Educator of the Year Award. He has taught at the junior high for the past 26 years.

Mabuce was presented the award by Kinder, who said he looked to Mabuce as a role model early in his education career. “I’m proud to know him,” Kinder said. “He’s a quintessential Jackson Indian.”

Scott Givens was recognized as the club’s community servant recipient for his dedication and service to the Jackson community. Givens is the manager at Southeast HealthPoint Fitness in Jackson, where he organizes and hosts the annual Independence Day 5K.

He is a board member for the Uptown Jackson Revitalization Organization and the Jackson Area Chamber of Commerce, and he is also involved with the Boy Scouts of America, the American Cancer Society Relay for Life, the American Heart Association, Project Charlie and SoutheastHEALTH Foundation.

Givens is an active parishioner at St. Mary Cathedral, where he hosts the church’s dinner auction and organizes its 5K run, and he volunteers as a youth basketball coach.

Dillon Versemann was presented the Newcomer of the Year Award. Versemann served as the club secretary for the 2021-22 year and was sworn in to continue as secretary for another year.