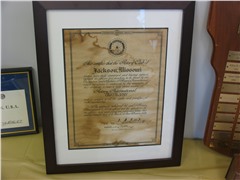 With helium-filled gold foil balloons forming the numeral “90” behind the lectern, the Jackson Rotary Club celebrated a milestone in its history — one decade shy of a century — on March 26 at the Jackson Civic Center.

The Jackson Rotary Club was chartered March 27, 1929, sponsored by the Cape Girardeau Rotary Club. That event was held at Hotel Jackson (where City Hall now sits) with 22 members present.

Today, the club has grown to 48 members.

Following a dinner catered by Tractors, T. Ron Hahs and T. Wayne Lewis presented a slide program and discussed the history of the club.

Rotary International was founded 25 years prior to the Jackson club (on Feb. 23, 1905) in Chicago, IL, by Paul Harris. He thought it was a good idea for business leaders to meet together and form a service club to help their community. Each member represented his profession. The name came from the early practice of rotating the meeting locations, Hahs explained.

The charter president of the Jackson club was M. G. La Pierre. Fred Kies was vice-president and Lawrence Snider was secretary-treasurer. The first year saw 11 new members join the club.

Any resistance that men had to admitting women soon passed. Allowing women to join was “one of the best things that ever happened,” said Hahs.

Lewis explained some of the projects Rotary has been involved in over the years. The first club project was sponsoring Boy Scout Troop 11, which it sponsors to this day.

Other projects include taking tickets for the annual Jackson Band Festival, helping build the swimming pool in City Park, and building the first foot bridge across Hubble Creek.

By far the biggest project was building Rotary Lake in 1977, followed by a picnic shelter near the lake and walking trails around the lake.

Another major project was in 2005-06, when Jackson Rotary combined efforts with three Cape Girardeau Rotary Clubs to build a Habitat for Humanity house in Cape Girardeau.

The Rotary Foundation is the funding arm of Rotary International. Jackson Rotarians have generously contributed some $300,000 to the Foundation over the years.

The Jackson Club has been very supportive of the International Youth Exchange program, having sent 60 local high school students to other countries for a year and hosting 44 students from abroad since 1966.

In addition, seven local students have been named “Rotary Foundation Ambassadorial Scholars” with funding for a year of university study, mostly in foreign countries.