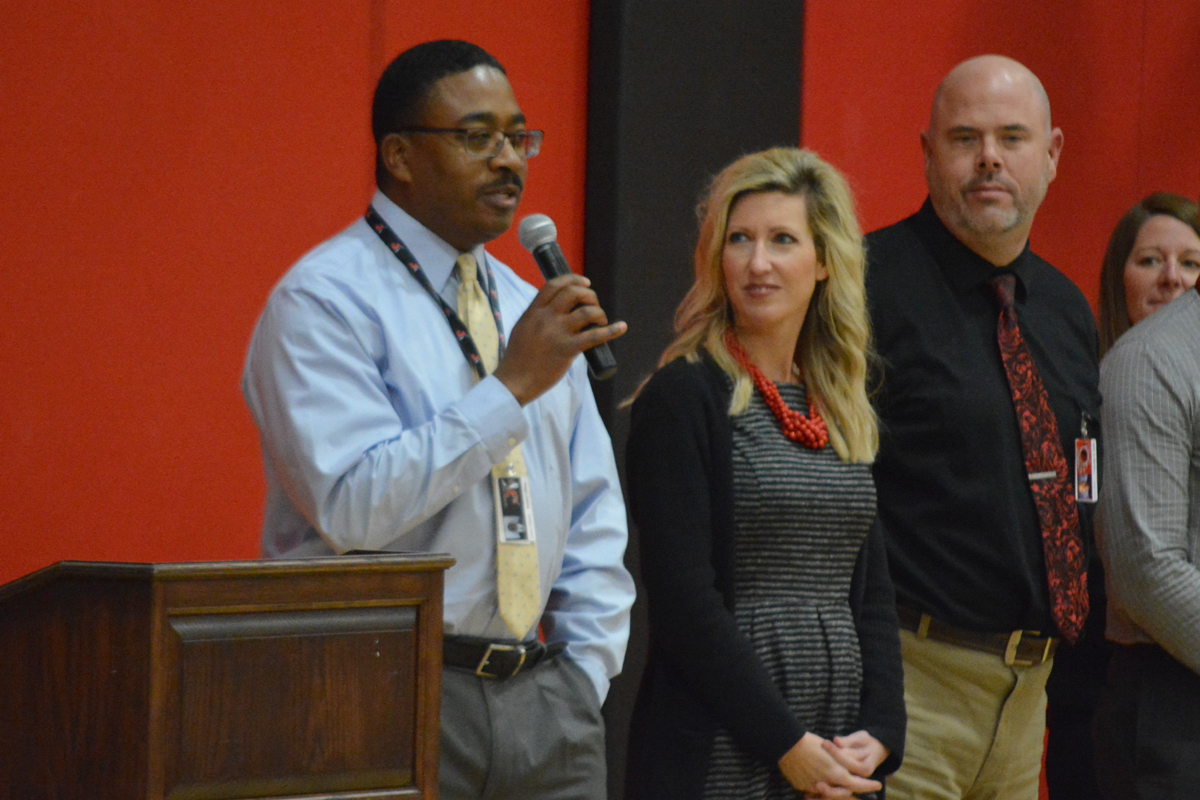 Jackson R-2 School District Chief Financial Officer Terry Gibson (left) was recognized during the June school board meeting for his work in the district for the past five years. Gibson is shown with Chief Marketing and Communication Director Merideth Pobst and Associate Superintendent Keenan Kinder. Photo by Jay Forness

The Jackson R-2 School Board approved the district’s new strategic plan, which will guide the future of the district for the next three to five years, during its June 14 regular board meeting.

The new strategic plan details 11 new objectives for the district – focusing on retaining faculty and staff, student success, leadership, the district’s culture and being financially prepared for facility upgrades.

Many of the objectives include creating committees and task forces within the district to figure out the best way to move forward to achieve these goals. Committees will be formed to look into expanding the district’s early childhood program, to recommend strategies for improving partnerships with the business community, to examine student achievement deficiencies and to define the attributes of a Jackson graduate.

Each of the action goals include set deadlines such as developing a long-range facility plan by December, establishing a minimum unrestricted annual fund balance for the school district to be effective by 2025 and creating professional development plans for district leaders by August.

“They are all time bound so we are held accountable for what we are doing,” Superintendent Scott Smith said. “It has been a great process and I have learned a ton in the last seven to eight months that we have been doing this.”

– Creating and sustaining a positive culture and practices to retain and reward highly qualified personnel.

– Preparing for the long-range facility needs of the district.

– Establishing a plan to develop a “portrait of a graduate.”

– Intentionally building relationships and partnerships with the business community to better train students to enter the work force.

– Creating a professional development plan for the school board.

– Developing a comprehensive professional development plan for the leadership team of the school district.

– Gathering information to assess the climate and culture data from all stakeholder groups.

– The school board establishing a minimum fund balance.

“During this process, we have incorporated input and thoughts from almost 700 stakeholders,” Smith said. “We have met with every building and have given the opportunity for every staffmember to participate, as well as community forums, parent forums and meetings with students. We tried to get as much input as we could about what they would like to see in the district.”

• The board approved the budget for the upcoming 2022-23 school year, including an estimated $64.5 million in expenses and $67.7 million in revenue.

Chief Financial Officer Terry Gibson said the district should end the year with a surplus, ending the year with an estimated $19.2 million compared to its beginning balance on July 1 of $16 million.

The district is budgeted to spend $32.5 million from its teacher fund, $26.4 from its incidental fund, $3.3 million in capital projects and $2.3 million in debt services during the upcoming school year.

• The board approved the upcoming school year’s salary schedules for certified and classified staff members, as well as athletic coaches. Assistant Superintendent Matt Lacy said all certified teachers in the district will receive approximately a three percent raise.

Gibson said it was a good move to go back to a salary schedule for classified staff, after moving away from that system in prior years. “The staff appreciates being able to anticipate their raises and it creates good morale when it comes to the view of how transparent we are being about salaries,” Gibson said.

Starting coach salaries range from $1,140 to $6,080 depending on the role, with raises due to their experience coaching.

• The board raised school meal prices for the upcoming school year, with student meals increasing 10 cents from the last time the district had to charge for school meals. Student meals were free due to a United States Department of Agriculture (USDA) program last year, but that program ended in May.

These meal prices remain the same from this year’s summer school. Including summer school, the district has served more than 1 million meals during the school year.

Reduced prices for those who qualify will remain at 40¢ for lunch and 30¢ for breakfast. Letters will be sent to parents to give more information about who may qualify for the free or reduced price school meals.

• The board approved the 5-12 grade math and science curriculum, continuing its district-wide curriculum review process that began last month. Teachers throughout the district are involved in developing and maintaining the curriculum, which covers the content that is taught in each course.

“The standards are broad, so they often occur in more than one unit,” Middleton said. “From there, we form our units and then we get to begin planning our instruction.”

Spurgeon added the science curriculum team follows a similar process of finding out where the standards fit, with the Missouri high school science standards having to be separated between the various different science classes.

Spurgeon said the team has also split up the standards at the middle school and junior high to give each grade a different science focus. “Right now, fifth grade is teaching an overview of science and catching everybody up,” Spurgeon said. “Sixth grade is life science, seventh grade is physical science and eighth grade is Earth science.”

The core science curriculums approved by the board included fifth through eighth grade science, Physical Science, Biology and Chemistry.

The district writes its own curriculum instead of following any particular textbook or other outside plan. Spurgeon said one of the advantages of doing it this way is that many science textbooks don’t typically keep up with changes in Missouri’s standards.

“We don’t want to spend that much money on a textbook that doesn’t keep up,” Spurgeon said. “The book that I should be teaching Earth science from still says Pluto is still a planet – it hasn’t been that way for over a decade.”

Spurgeon added that all teachers who teaching the same course use the same assessments and use the same pacing charts to make sure to get through the entire course curriculum.

“Every year we modify based on the data that we get back – not only from the standard assessments, but also things like the ACT and talking to places like SEMO to make sure our kids know what they need to know and that they are prepared for life,” Spurgeon said.

• The board voted to appoint Associate Superintendent Matt Lacy as the new board treasurer, replacing outgoing Chief Financial Officer Terry Gibson. The board also approved adding Lacy’s signature to the district’s bank accounts.

Gibson, who will be leaving the district at the end of the month, has worked as the district’s head financial officer for five years.

Gibson announced that he accepted the role of chief executive officer of finance and operations for the Raytown School District near Kansas City, where he is an alumnus.

“I appreciate all the support I have received throughout this five year journey,” Gibson told the board and administrative team at the end of the meeting.

The new policy states that the committee will give preference would be given to names that have a special significance to the community and to names of individuals that are local or associated with the intended use of the new facility.

The policy also states that the board may decide to sell the naming rights for a new facility when it is in the best interest of the district to do so and the chosen name is consistent with the educational mission of the district.

Another new policy outlines how memorials such as trees, benches or other memorial items in memory of a deceased member of the school community can be added to district grounds or to a school facility. All memorials must be approved by the superintendent and building-level administrator before being placed on district property and must not interfere with student learning.

The district also added a new policy focusing on the Missouri Course Access and Virtual School Program (MOCAP), which offers virtual courses to all students in grades K-12 throughout the State of Missouri. Information about MOCAP courses was removed from the district’s policy on virtual learning.

The virtual learning policy was also updated to include more information on the responsibility of students during virtual courses to make sure their learning environment and conduct is not disruptive to the class.

The district revised its changed made to staff benefits last month, now stating that support staff members’ benefits such as health insurance would become effective on the first day of the month following 30 days of employment. The board policy changes approved last month were incorrectly made to the benefits policy for certified teachers.

Associate Superintendent Jessica Maxwell said certified teachers and other professional staff will continue to receive all their employee benefits immediately when they begin working for the district.

The student discipline board policy was also revised to match the student handbooks regarding cell phone usage. The changes removed a reference to pagers and added smartwatches to the list of personal electronic devices that cannot be used during the regular school day.

• The board approved several bids, including a gasoline and diesel fuel bid from Co-Op Service Center and a tire bid from Purcell Tire. The Board approved a bid from Santie Oil Company to provide oil, grease, transmission fluid and antifreeze. All three awarded companies received the same bids last school year.