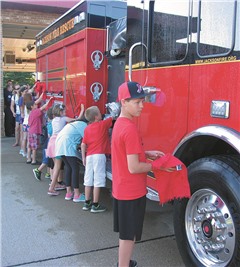 A new custom-built $445,000 fire engine was dedicated by Jackson Fire and Rescue June 6 at Fire Station 1.

“This piece of equipment truly is an investment by the community and it’s for the community,” Fire Chief Jason Mouser told a crowd that had gathered for the occasion.

The fire truck was manufactured by Precision Fire Apparatus using input from Jackson firefighters. “It’s not only an American made product, it comes from here in Missouri,” Mouser said. “This work was done collectively, weighing the pros and cons of every detail.”

It once took 29 minutes for a house to reach flashover, said Captain Rob Greif, the public information officer. With all the new flammable materials used in construction and furnishings of homes, it now takes only three minutes. That’s why it’s important to deliver a lot of water as quickly as possible to a fire.

The bins on the side of the truck are organized so the right side contains equipment needed for rescue and the left side has what’s needed for fire suppression.

The cab, which holds six firefighers, was designed with their safety in mind. It is equipped with airbags and roll-over protection.

State-of-the-art emergency lighting will help clear traffic out of the way when the truck is responding to emergencies.

The blessing of the truck was given by the Rev. David Dissen, chaplain of the Cape Girardeau police and fire departments (Jackson’s chaplain was unavailable). Dissen is retired from Trinity Lutheran Church. During the blessing, he asked the firefighters, who were lined up beside the truck, to place their hands on the vehicle.

Once the truck was blessed, it was hosed down by a firefighter and everyone had a chance to wipe down the truck with commemorative red towels provided by the fire department.

The truck was then pushed into the fire station by firefighters and officially placed into service.

This truck will not stay at Station 1. It will be used as the first responding truck out of Station 2. A 1977 fire engine was retired and a 1998 fire truck was moved into reserve, Mouser said.