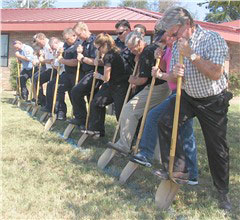 On the 18th anniversary of the 9/11 terrorist attacks on
America, Jackson Fire and Rescue broke ground for a huge 9/11 memorial to be
constructed in front of Fire Station No. 1.

“I want to thank everybody for coming out,” said Fire Chief
Jason Mouser. “I’m humbled by the attendance today.” He then led the gathering
in a moment of silence.

Mouser recounted the day of the attack. “It was a tough
time,” he said. “It’s still a tough time, 18 years later.

“We remember the 343 firefighters, the 60 law enforcement
officers, the 184 people at the Pentagon, the 40 courageous individuals on
Flight 93 that took down the terrorists and saved additional lives. The 2,350
people that were in the towers and near the towers when they fell — we remember
those.

“We’re proud to start this project. It’s  going to be something, not just for this
city, but for the county to be proud of,” he said.

Mouser thanked those who have contributed funds and labor to
make the project possible.

JFR Firefighter Samuel Herndon designed the 9/11 Memorial.
He described it as a place “where our children and grandchildren will be able
to come and remember the worst terrorist attack on American soil,” he said.

Herndon then described the memorial.

The base will be in the shape of the Pentagon, to remember
Flight 77 that crashed into the Pentagon at 9:37 a.m., killing 59 on board and
125 on the ground. It will be made out of Pavestone pavers, which are being
donated by Kasten’s and Pavestone.

Two granite towers will stand almost 7 feet tall near the middle of the memorial, reminding us of
the Twin Towers of the World Trade Center; Flight 11, which crashed into the
North Tower at 8:46 a.m., killing 87 people on board; Flight 175 that crashed
into the South Tower at 9:03 a.m., killing 60 on board; and the 800 civilians
and first responders who perished in the collapse of the South Tower; plus the
more than 1,600 people who died in the collapse of the North Tower.

Engraved in the granite towers will be the names of the 343
firefighters who died when Twin Towers collapsed.

A firefighter statue will kneel toward the towers, showing
respect to his fallen brothers and sisters.

Behind the towers will be three flagpoles with the flags of
our country, our state and the firefighting profession.

Four benches will be engraved with facts about 9/11.

The walkway from the parking lot to the memorial will be
known as the Cape Girardeau County Fallen Firefighters Memorial Walkway. It
will be the place to honor any firefighter in Cape County who loses his or her
life in the line of duty. A stone will be engraved with the name of the
firefighter.

Sponsorships are still needed to help pay for the project.
Contact JFR if you wish to be a sponsor or donor. Sponsors will be recognized
on a plaque at the beginning of the walkway.