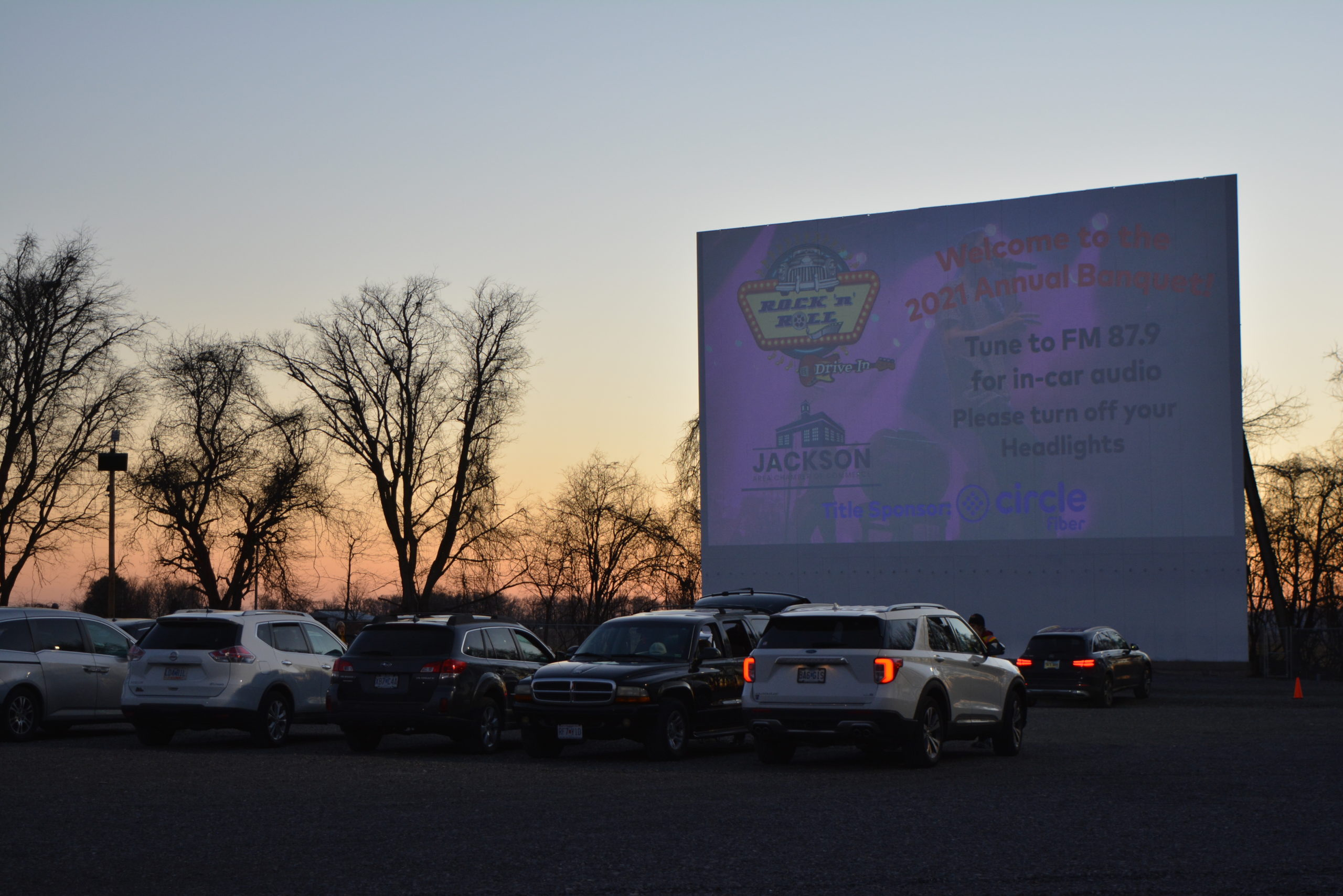 Attendees of the 2021 Jackson Area Chamber of Commerce Annual Banquet were able to stay in their cars and watch the big screen at the Rock "N" Roll Drive In to see this year's award winners. Photo by Jay Forness

The Jackson Area Chamber of Commerce’s annual banquet on March 3 looked a little different this year due to COVID-19, with changes to the location, the food and the award presentations.

This year’s banquet was held at the Rock ’N’ Roll Drive-In, located in Chaffee, and awards were presented and accepted through pre-recorded videos projected onto the outdoor screen. Instead of clapping, car horns honked as each award winner was announced.

Guests were provided snack boxes featuring popcorn, candy and water, and were able to pick up a Domino’s pizza at the concession stand. Attendees could stay after the ceremony for a showing of the 1995 comedy Tommy Boy.

Loos said he was humbled and flattered to receive the award. “I think Jackson has always been real special to me,” he said. “I always wanted to make a difference in this community like so many did before me.”

Loos, who has lived in Jackson for 67 years, said this city has been able to provide him faith, family and friends. He said he became involved with the Tribal Council when his oldest daughter, Kate, was a freshman in high school.

“I showed up one night at the stadium saying, ‘I want to help,’ and 20 years later, here I am still trying to make a difference,” Loos said. He said he was able to see others in Jackson help out their community and hopes that his work inspires others in the future to do the same.

The Business of the Year award was given to Saint Francis Healthcare System and SoutheastHEALTH. Laura Findley from Safe Families for Children presented the award.

Maryann Reese, president/CEO of Saint Francis, said the healthcare system’s top focus over the past five years has been on engaging the hearts and minds of its community – although the past year “has all been about COVID.” Reese said they have focused on keeping everyone safe during the pandemic and are now able to administer vaccines for the virus.

In addition, SoutheastHEALTH has added several new providers over the past few years to “meet the growing needs of the organization and the community.”

The Small Business of the Year award was given to GearHeads Auto & Diesel Repair, owned by Carlos and Amy Ybarra. Chris Horrell of Bug Zero presented the award.

Carlos Ybarra said over the past 10 years, GearHeads has grown by being involved in the community, helping their team grow and focusing on customer service. Amy Ybarra said they are now in the center of Jackson with a four-bay shop.

Amy Ybarra added that they run seminars to empower women to make the best decisions about their vehicle. “We’ve had the opportunity to educate over 250 women through these women’s seminars, and we are excited about this mission.”

“From the very beginning of GearHeads, customer education was very important to us,” Carlos Ybarra said, adding that the Chamber helped them create relationships with new friends and customers.

“I’m blessed to have kids that already have a good work ethic and a good base to build on,” Wichern said. “We want to make them be able to choose their path because it’s what they want, not because it’s just what they feel like they can do.”

Wichern said she wants her students to leave her classes with a good foundation to be ready to go on their next step – whether it is college, a technical school or the military.

Mouser said she supports the Jackson Area Chamber of Commerce because it is her way to give back to her hometown community. “I just love Jackson, and I love to see it grow and prosper,” she said.

As an ambassador, Mouser said she has been able to grow personally and professionally. “I have met so many people and have made so many relationships in just a few years,” she said. “I just thank the chamber for allowing me to be an ambassador and really dive into this new phase of my life.”

Sheila King won the WIN Woman of the Year award. King is an owner of Seis Amigos and is a Realty Executive agent.

“The WIN program is a great thing to be involved in,” King said. “Every time I’m driving to the luncheon, I always sing to myself, ‘All we do is win, win, win no matter what’ because that’s what we do there.”

King advised women to follow their dreams and not second-guess themselves. “If you have an idea and it’s driving you – do it,” she said.