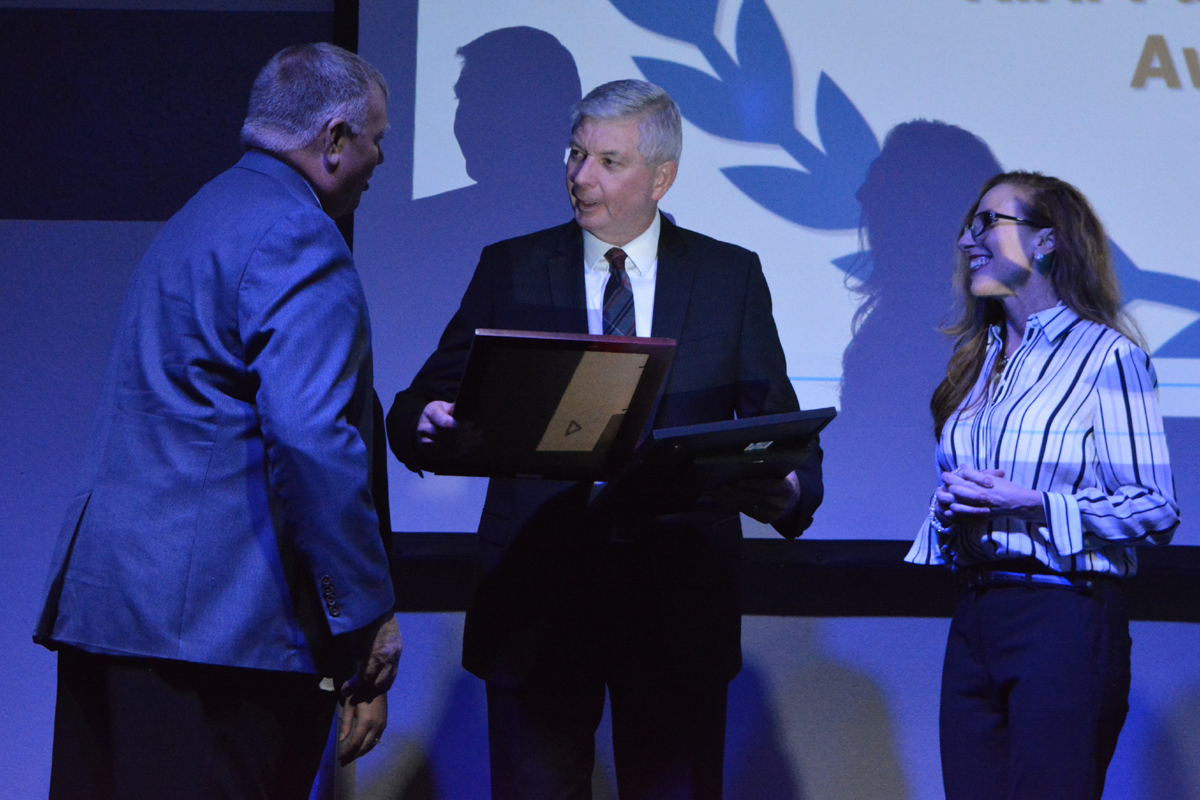 The Jackson Area Chamber of Commerce’s annual banquet returned to the Jackson Civic Center on Friday, after being held at the Rock ‘N’ Roll Drive-In last year. The chamber celebrated its 100-year anniversary during the event, in addition to honoring area leaders and businesses.

The Jackson chamber was formed on June 2, 1921, with only 40 citizens attending its first meeting. Today, the chamber has more than 500 members. Jackson Area Chamber of Commerce President Brian Gerau thanked those in attendance for celebrating the organization’s first 100 years with them, saying “hopefully we will have 100 more.”

The 50,000-square-foot speculative building at 2550 Industrial Lane in Jackson was purchased by Midwest Sterilization Corporation in Oct. 2021 and the chamber moved into the former First Missouri State Bank building on East Jackson Boulevard in Sept. 2021.

Missouri State Representative Barry Hovis and State Senator Holly Rehder presented resolutions to the chamber for their 100-year anniversary, as well as to each award winner.

John N. Thompson of First Midwest Bank was named the 2021 R.A. Fulenwider Meritorious Community Service Award recipient. The award is given to an individual who has dedicated their life to the advancement of Jackson and past recipients of the award choose each year’s winner.

Thompson serves as the community bank president of First Midwest Bank in Jackson, after being in banking for more than 40 years.

“Whatever your passion may be, I think it’s the right thing to do to give back,” Thompson said. “That may be a little old school, but so be it.”

“I know or knew all of the people who have received this award prior to me – I am very humbled, thankful and grateful that the committee members felt like I was worthy of receiving it,” Thompson said. “The recipients of this award before me have done miraculous things for the City of Jackson, which in my opinion is the best little city in America.”

The Business of the Year award, presented by The Bank of Missouri, was given to Midwest Sterilization Corporation. The medical device sterilization company has been family-owned since 1984, with over 200 employees between its two plants – one in Jackson and one in Laredo, TX.

Karen Eldridge, Midwest’s president and CEO, said the company has continued to grow as its customer base has grown. “We are proud to be responsible for well over 40% of the nation’s sterile procedure trays, as well as lifetime implantables such as pacemakers and catheters,” Eldrige said.

Eldridge, who said she was surprised and honored to receive this award, attributed the business’ growth to the strong foundation set by her parents, the past and present employees of the company, their quality service and having great customers to work with.

“We are currently expanding with the addition of a lab and looking at the potential of contract manufacturing,” Eldridge said. “It has always been a dream of mine to make an incubator for medical device startups here in Jackson. With the addition of the lab and the new warehouse we recently purchased, this dream can become a reality.”

Seabaugh Appraisal and Consulting was awarded the Small Business of the Year award. Linda Puchbauer presented the award to owner Mike Seabaugh. The business was started in 2013 and specializes in commercial real estate and land appraisals.

“When I started the business, it was a scary proposition going from working for somebody else to going out on your own,” Seabaugh said, adding that he has been a real estate appraiser since 2003.

Seabaugh said he has always operated under the golden rule, saying his reputation in the community and good word of mouth are what led to his company’s growth.

Chamber Vice President Jen Berti said Kaiser has been a part of the Jackson Area Chamber of Commerce family for many years, serving as the organization’s “unofficial, official photographer.”

“She attends all of our events, and if she isn’t there, we wonder if everything is okay,” Berti said. “She is someone who lights up the room as soon as she walks in and always has a smile on her face that will make anyone’s day.”

Berti said Kaiser has been a huge supporter of WIN since day one, in addition to being a chamber ambassador, and the WIN committee was thrilled to recognize her for her positivity, help and support.

“I want students to remember me as someone who made them feel comfortable as they were trying to get an education,” Mabuce said. “I would hope that they would remember that I was kind, that I was knowledgeable about the subject and that I cared about them.

April Creech of Fox 23 won the Sam Roethemeyer Ambassador of the Year award. This award is given to highlight someone who is involved with chamber events and helps recruit new members for the chamber. Fox 23 was the presenting sponsor for the award.

Creech, who works as a marketing consultant for KBSI-Fox 23, said the chamber helped her professional and personally in many ways. “Most of the people that I met through the chamber have become close friends,” she said.

She said being a chamber ambassador has allowed her to grow her business connections, as well as help others grow their own businesses.

“I live on the outskirts of Jackson, so that is why I am very active with the Jackson chamber,” Creech said. “Giving back to the community in which I live in is beneficial in many ways, including the relationships that mean everything and being able to participate in local events. It’s a great community.”

The 2022 chamber board officers were installed, with Merideth Pobst serving as president, outgoing board president Matt Huber serving as vice president and Scott Givens serving as secretary and treasurer.

Matt Huber, Ron Niswonger and Chris Cole were named onto the Jackson Industrial Development Company board of directors.