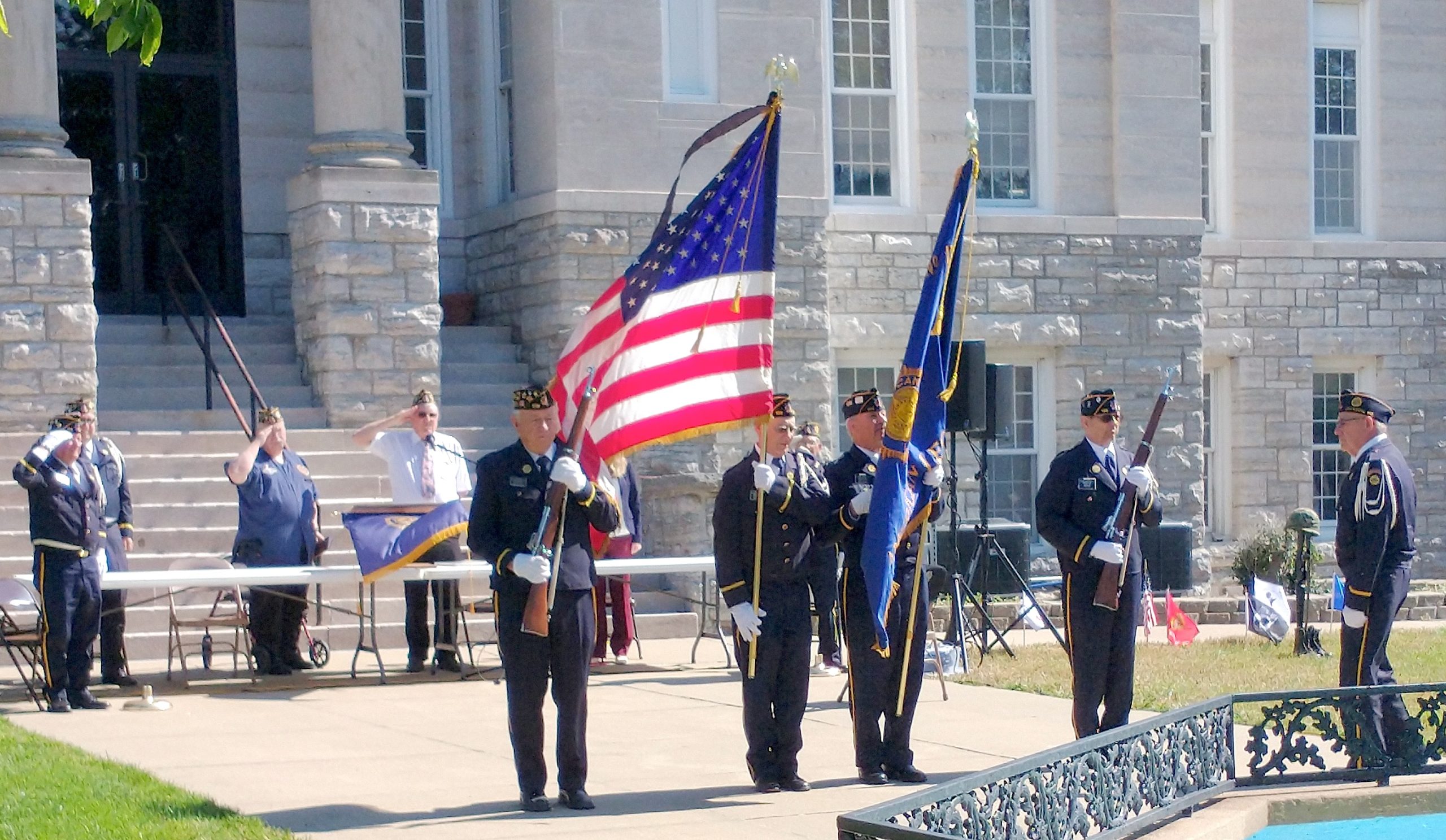 The American Legion Post 158 Honor Guard retires the colors as the ceremony comes to an end. Photo by Gregory Dullum

The sun shone brightly in sparkling blue skies, but strong gusts of wind kept the crowd cool as people gathered in the shade of the old courthouse lawn in Jackson to pay tribute to fallen military heroes on the morning of Memorial Day May 30.

As the Jackson Municipal Band began to play a half hour of patriotic tunes, a bald eagle took to the skies over the courthouse to the delight of onlookers.

“On behalf of American Legion Post 158, I’d like to thank each and every one of you for coming out and remembering the purpose for which we are here — and that’s to remember all those men and women who died while serving their country on active duty,” said Post 158 Commander Gary Kamp in his welcoming remarks.

He noted that this holiday originated on May 3,1868, with Retired Civil War Gen. John A. Logan (of John A. Logan Community College fame). Logan was then national commander of a veterans group called the Grand Army of the Republic, and he issued General order No. 11 that called for a national day of remembrance for the Civil War dead. Logan called it Decoration Day.

In 1890, the meaning of the day was expanded to include those who died in other American wars and unofficially became Memorial Day.

“We’re pleased to be able to celebrate 154 years of recognizing the sacrifices of those people who gave all in order to maintain our freedoms that we so much enjoy,” Kamp said.

Libby Johnson, administrator at the Cape Girardeau VA Health Care Center and a veteran of the U.S. Navy (2002-2008) was the guest speaker for this year’s event.

“Let me say that addressing an audience to honor those who have died in service to our nation is always difficult,” said Johnson. “Words will never approach the enormous height of their sacrifices.”

Quoting from Abraham Lincoln’s Gettysburg address made on Nov. 19, 1863, she said, “The world will little note nor long remember what we say here, but it can never forget what they did here.”

Johnson added, “Such is the case today and always. Memorial Day is a time to solemnly remember to ensure none of us ever forget our fallen who, for nearly 250 years, have devoted themselves to the cause of liberty.”

“We also honor those who went missing in action and remain unaccounted for,” shedded.

Richard Sparks, second vice commander of Post 158, had placed a black MIA flag over an empty chair earlier in the program.

Kamp announced the names of JHS graduating seniors who will be going into the military. Those who were present stood to be recognized.

The American Legion Honor Guard presented the colors, Steve Meier sang the National Anthem and Jim Roche, post chaplain, gave the invocation. The mournful notes of Taps were played by trumpeters of the Municipal Band as the ceremony came to a close, and then the colors were retired.

The Legion Auxiliary again offered refreshments at the Legion Hall following the ceremony.