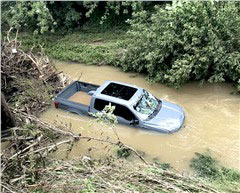 After a 5-year-old girl fell from the low-water bridge over Hubble Creek in City Park and nearly drowned (along with her 11-year-old rescuer) on May 24, the City of Jackson has been discussing what can be done to make the crossing safer.

Downstream, the Mary Street low-water bridge is also a problem during flash flooding. Another pickup truck was washed off that bridge into the creek July 31, making two in 10 months.

At a July 6 Mayor and Board of Aldermen study session, an engineering firm presented four options for Hubble ford in the middle of the park:

2. Place grates over the pipes so children will not get pushed into the pipes by the current. However, high water and a strong current could pin children against the grates and still drown them.

3. Fill the pipes with concrete. Water would not be able to flow under the bridge at all, but there would be a continual flow over the bridge, possibly making it more dangerous.

4. Remove the low water bridge completely. This means there would be no access across the creek at that spot.
City staff took these options under advisement and came back during study session Aug. 3 with its own recommendation to the Board of Aldermen.

“In this case, Smith and Co. said the safest thing for the Board to do is to take out Hubble ford and return that area to its original pristine state,” said City Attorney Tom Ludwig. “The other end of the spectrum is to build another bridge, apply for a grant, and tend to make that as pretty as the rest of the park — install facing or whatever — but really it’s up to this Board as to what you want to do.”

The City is protected by insurance and is covered “if there are other incidents out there,” he added.
To date, there have been no fatalities and no lawsuits from incidents that have occurred at Hubble ford or at the low-water bridge on Mary Street.

“We certainly have had our share of near misses at both of these locations,” said City Administrator Jim Roach.
Ludwig suggested referring the matter to the Park Board to see what it recommends.

Roach said he recommends that both low-water crossings be replaced with regular bridges. “I believe that the Hubble ford bridge ought to be removed and replaced as soon as possible,” he said. “I don’t know what that time frame is, but maybe by the end of the year. The Mary Street bridge … I can see that taking about a three-year period [to complete].”

Roach told the aldermen about the incident that had happened the previous Friday night (July 31): “We had another pickup truck swept off the Mary low-water bridge. It made it all the way down to the wastewater treatment plant. The driver, fortunately, survived and was extracted or made it out of the creek on his own — I’m not sure — around Adams Street. He … tried to make it across that bridge [on Mary Street] and didn’t make it.”

“Did we have it barricaded?” asked Alderman David Hitt.

“We did not,” replied Roach.

“It [the water] came up quickly,” Alderman Paul Sander explained. There was flash flooding caused by heavy rains north of Jackson. The Mary Street bridge is barricaded at times, but it was not barricaded when that pickup truck was swept away by high creek water.

Roach said the bridge to replace Hubble ford would be a single-lane light duty bridge. It could be a precast concrete arch bridge with rock facing on the sides to match the rock sides of the creek.

The bridge on Mary Street would be a regular roadway bridge such as the Washington Street bridge across Hubble Creek.

He said there may be grants available to help pay for the construction of the bridges.

Sander commented that he would be opposed to any proposal that would eliminate either bridge. He wants to keep both creek crossings.

The Aldermen agreed that the matter should go to the Park Board for its recommendation. There is no need to rush into a solution. As we get closer to winter, creek levels generally drop and there will be less chance of flash flooding. Plus, it will take some time to investigate grant possibilities.

The HPC recommended RDG Planning and Design with a total proposal cost of $25,000. This firm was rated significantly above the other two. The quality of its proposal, the experience of its team on similar projects, its favorable recommendations from others who have used this firm, and its innovative use of GIS for a published interactive map, were all factors in their higher rating.

The Historic Architectural Survey is funded 60 percent by a grant from the National Park Service (managed by MDNR’s State Historic Preservation Office) and 40 percent by the City. The budgeted amount for this survey was $25,000 ($15,000 from National Park and $10,000 budget item in 2020 city budget).