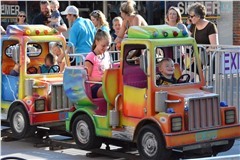 The annual celebration of Homecomers is coming to Uptown Jackson July 23-27. During study session June 17, the Jackson Mayor and Board of Aldermen again discussed the hours of operation for the carnival as they moved toward approving the street closure request being made by the American Legion.

Ten out of 11 Uptown Jackson businesses had previously asked that Homecomers be shortened, because South High Street in front of their businesses is closed during Homecomers. The businesses are open during the day when the carnival and food vendors are closed, and closed when Homecomers is in full swing after 6 p.m. They claim Homecomers hurts their profits.

As a compromise, the businesses requested that the carnival and food vendors stay open all day Saturday, instead of opening at 6 p.m. This would allow the Uptown businesses to draw the Homecomers crowd into their businesses on what is normally the busiest day of the week for Uptown businesses.

Larry Koehler, representing the American Legion, told the Board of Aldermen that Joe Sutton, owner of carnival, had agreed to stay open all day Saturday but “Mr. Sutton was very reluctant to do it.” Doing so required his workers to start at 10 a.m. to get the rides ready by 11, work all day in the hot sun, then continue working when the big crowds came in the evening, and then work all night to tear down the rides and have the streets cleared by 8 a.m. Sunday morning. “That’s a brutal schedule for anyone,” Koehler said. “You could hear the frustration in his voice,” Koehler reported, as Sutton made the agreement by phone. Sutton stayed awake all night after the phone conversation, thinking about the Saturday hours. He called Koehler back and told him the carnival would open from 11 a.m. to 2, “and that’s it.”  The carnival workers would get a break from 2 to 6 p.m.

Koehler contacted a number of food vendors who agreed to be open 11-2 on Saturday. Some may remain open all afternoon. A few food vendors would not open during the day because they rely on volunteer help and had a hard time staffing their booths during evening hours.

Sutton agreed to have the carnival open 11-2 and sell 24 ride tickets for $18 (instead of the normal $20) if people get coupons from Uptown businesses.

Homecomers also may distribute coupons that can be redeemed in Uptown businesses.

The schedule for street closings will not change this year, so the Board of Aldermen may approve the request at its next meeting.

Koehler said that was a possibility, but it would require that the stage be moved from the courthouse lawn. It would not be good to leave the stage by the courthouse and have everything else a block away, he said.

City staff displayed a map of Uptown showing what space would be available for Homecomers if everything were moved one block south of its normal location. More discussion will take place before a decision is made for next year.

• Audit report: The Board accepted the audit report which was prepared for the City by Beussink, Hey, Roe and Stroder, LLC. There were no findings of irregularities.

The City did not have a footnote explaining the possible liability of health insurance provided to retirees.
A representative of the accounting firm said the Board should not be alarmed by that omission. Other municipalities have opted not to include that footnote in their financial reports, because that information is very costly to achieve. However, because of the omitted footnote, the City received a qualified opinion from the auditor.

• Appointment: The Board approved the mayor’s appointment of Autumn Pettit  to the Historic Preservation Commission to serve an unexpired term ending May 2021.

• Medical marijuana: The Board set a public hearing for 6 p.m. Monday, July 15, to consider amendments to the Code of Ordinances regarding the addition of medical marijuana dispensing, manufacturing, cultivation, and testing facilities as uses in specified zoning districts and establishing minimum setback distances from existing churches, schools and day-care centers.

• East Main & Oak Hill Road intersection: The Board approved a change order in the amount of $24,995 to Fronabarger Concreters Inc., of Oak Ridge, for its work on the renovated intersection and traffic signal at East Main Street and Oak Hill Road. Fill material for this project was taken from near the Civic Center. Where the fill material was removed, the City is having a slope reshaped.

• Humane Society: In study session, the Board continued its discussion before finalizing a contract between the City and the Humane Society of Southeast Missouri.

A new provision in the contract says the Humane Society will not accept feral (wild) animals (mostly cats) unless it has the funds to trap, neuter or spay the animal and release it back into the wild.

Tracy Poston from the Humane Society was asked how a cat is identified as feral. She said it usually cannot be picked up and it acts different in a cage than does a scared pet cat.

Charlotte Craig, a Board member of the Humane Society, said feral animals have not been accepted for several years. To accept them would require having a dedicated volunteer and a visit to a veterinarian to have the animal spayed or neutered.

When asked how big a problem feral cats are, Craig said only 10 to 15 feral animals are brought to the Humane Society each year. However, there is a big problem of wild cats in the area. She said there is a colony of cats living in Uptown Jackson, another in Cape Girardeau, and another out in the county.

If the City’s animal control officer can’t bring a captured feral cat to the Humane Society, there is not much choice but to euthenize the animal, reported JPD Captain Scott Eakers. Some veterinarians may offer special rates to do that.
City Administrator Jim Roach said the contract stipulates that feral animals would not be accepted unless there were funds available to deal with them. He asked if the Humane Society would take feral cats and bill the City separately for the cost (outside of the contract). He was told this could be done. In addition, the public would have to be educated that if a feral cat has a notch in its ear, it has already been spayed or neutered and does not need to be brought back in.

“I think we’re almost there,” Roach said, about reaching an agreement on the contract between the City and the Humane Society.

Construction on this project will begin early next year.