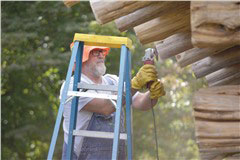 Improvements are being made to the historic Old Bethel Church in Jackson to make it easier to find and hold events.

Old Bethel Church is the first non-Catholic church west of the Mississippi River and was originally built in 1806, three years after the Louisiana Purchase. The congregation quickly outgrew the church and built a larger one in 1812, two years before the City of Jackson was incorporated.

Old Bethel is credited for starting nine other churches in their missionary effort, including the First Baptist Church of Jackson, before it closed in 1867.

In 2007, the 1812 structure was restored in its original location and with many of the original logs by the Missouri Baptist Convention. In addition to the original logs, 200-year-old nails and window glass was also used in the restoration.

Beverly Nelson, who is the chairman of the First Baptist Church of Jackson’s history committee, said they hope to allow more worship opportunities at the site and bring area churches in. She said now that Old Bethel is up and well taken care of, she wants to make sure it remains long after she is gone.

“This is our mother church, so it’s very important to us,” Nelson said. “I’m glad, and everyone else is too, that we have found our beginnings and the history.”

As part of the improvements, a new log-cabin restroom structure is being constructed. The new restroom will bring running water to the historic church and allow for longer events at the site.

“We’ve had some weddings out here, but they get married and then have to go someplace else for any kind of reception,” Nelson explained. The new restrooms will replace two portable toilets near the church’s entrance.

Old Bethel also joined the Southern County Church Tour in December last year, drawing many new visitors to the site. While the site does not have set open hours, Nelson said they “open up if we know a group wants to come.”

The log-cabin restrooms is being built by Tim Wilson, a pastor in Coffey, Mo. Wilson, who drove six hours to build the log cabin, was in Jackson for two days last week to put the cypress logs together to form the new structure.

Wilson said that the logs were pre-cut before they traveled to Jackson, and the whole structure was initially gether at his house to make sure they had everything they needed. ““It’s already been built once,” Wilson said. “It’s a puzzle.”

Wilson, who is that pastor at Coffey Baptist Church, said he got into building log cabins because it was a dream of his father’s and he needed a way to make money when he got into ministry. He said this was the fifty-first or fifty-second log cabin he has built.

Wilson added that he was drawn to the project because of the site’s Baptist history, and hoped to have the project completed by Christmas. The restroom facility will have separate men and women’s restrooms, as well as a utility closet in between.

In addition to the new restrooms, Nelson said they are currently working on getting Old Bethel on the National Registry of Historic Places. She said the church’s application is close to being sent in and they hope to be on the list early next year.

“Our goal is to get on the register early in 2021, because that’s Missouri’s 200th birthday,” Nelson said. “I think it would be neat to have another part of Missouri’s history on the national registry.”

Nelson also recently went in front of the Jackson Board of Alderman to ask that the gravel road leading up to the historic site be named Old Bethel Lane. While the church is only accessible from Lee Ave, to get to the historic site visitors must turn onto an unmarked gravel lane, cross a low water bridge over Goose Creek and continue a distance to get to the church property.

“I think it will be much easier to find us,” Nelson said. “Right now our address is 1910 Lee Ave. If we have an actual street that we can tell them to come to, then they can look for that street name.”

She said the church’s new address has already been checked to be a good 911 address, and the board of alderman is expected to vote on the road name at their next meeting.

“It’s such an inspirational place and a beautiful place,” Nelson said. “It represents so much to me – not just our past, but to me it represents the present day as well. We are taking care of it today and respecting what came before.”