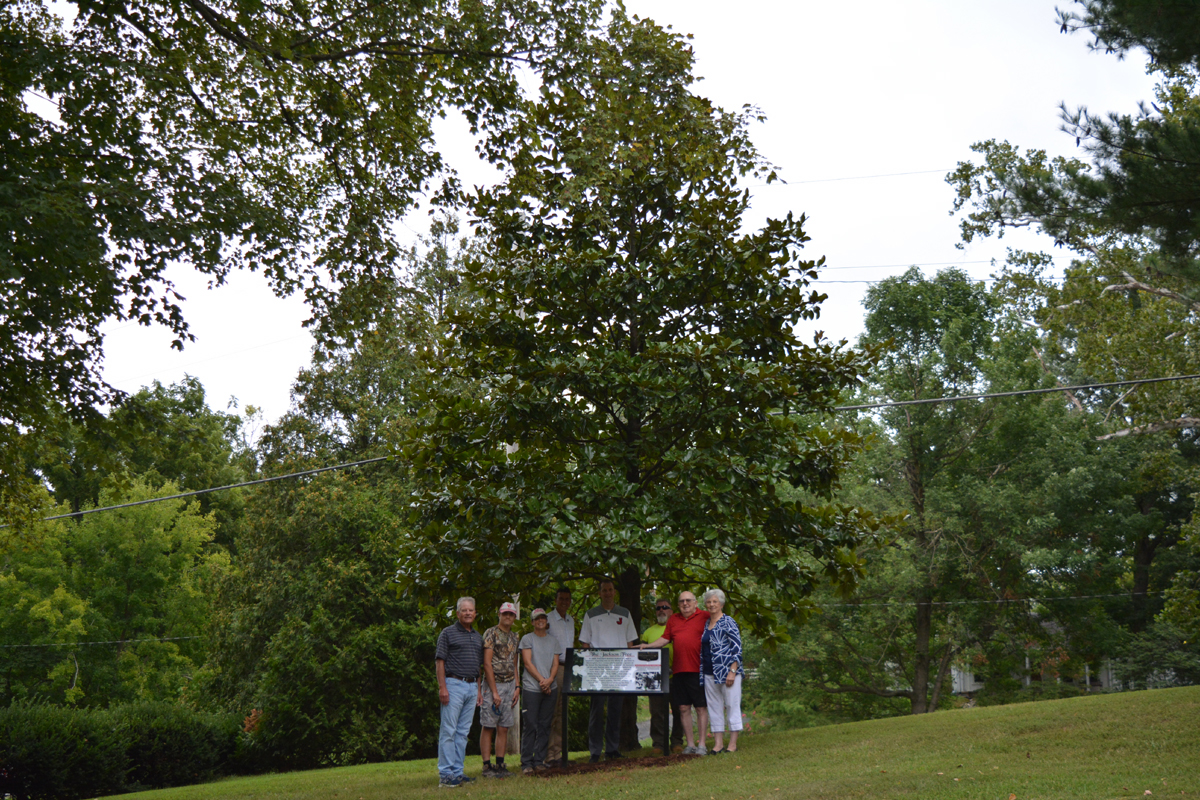 The Jackson Tree, which comes from the southern magnolia tree planted by President Andrew Jackson at the White House in 1828, is located near the City Park maintenance shop at 800 Stoney Ledge. Photos by Jay Forness

A Jackson City Park tree with historic roots to Andrew Jackson’s time at the White House will now be recognized with a new sign denoting its importance.

The southern magnolia tree, which is located on the east edge of the park between Hubble Creek and Cascade Drive, began its life as a cutting from a tree planted by Jackson on the White House lawn.

The original tree came from Jackson’s home, The Hermitage in Nashville, and was planted at the White House in 1828 in memory of Jackson’s wife Rachel, who died just before he took office.

In 1995, a small sapling from the original tree in Washington, D.C., was given as a gift to the city from the White House to commemorate the fact that Jackson was the first town to be named after the former president.

The tree was planted by then-mayor Paul Sander and his son Sam on April 8, 1995, during a Park Day cleanup event. Sander said that year’s Park Day also celebrated the 100th anniversary of the City of Jackson park system. 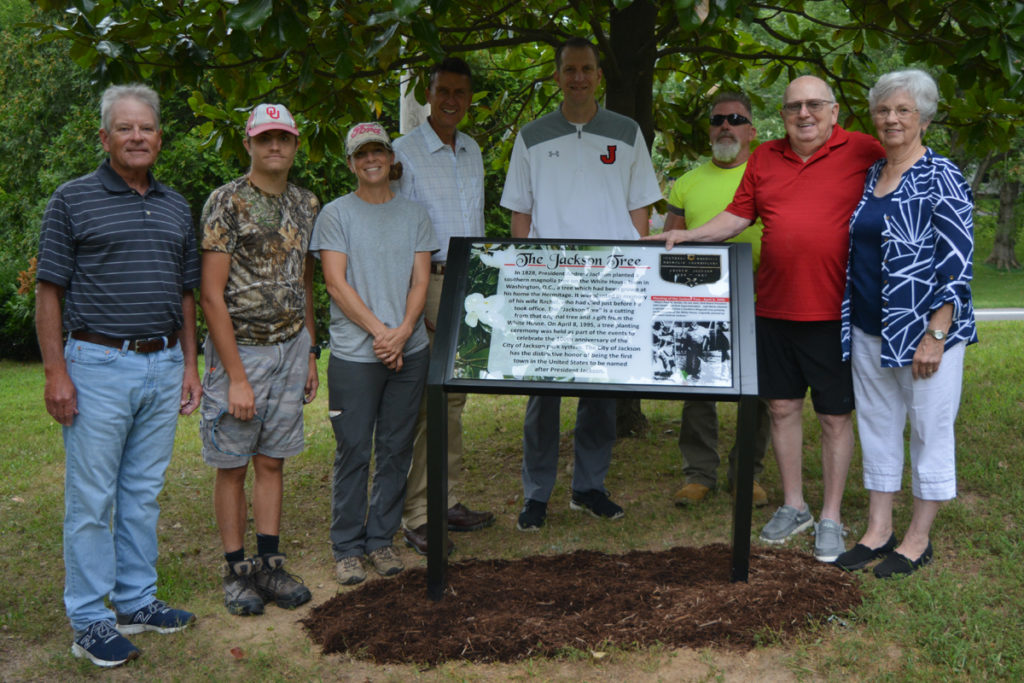 “It was a really nice day if I remember right, and there were a ton of people here in service to the parks,” Sander said. “All of a sudden, somebody asked me if I would plant a tree and I said ‘sure.’ It was a little sapling and I had no idea at the time its deeper history.”

It is believed to be one of 12 saplings taken from the original magnolia tree, but it is unknown how many of the saplings survived. The original tree was cut down in 2017 after standing for nearly two centuries.

“To have a tree that came from the White House is pretty cool, and now it’s a really nice and beautiful tree,” Sander said.

Leland and Bev Nelson were instrumental in getting a marker for the tree installed, with Leland saying he first noticed the tree around 2015.

“I used to walk in the parking lot, and I noticed the tree and how beautiful it was,” he said. “It didn’t have any marker on it, so I’m so happy it’s now recognized. Jackson is such a nice community to live in, and to have this connection with the national government is a great sign of unity.”

Bev Nelson added that every time her husband walked in the park, he came home saying that someone needed to do something about the special tree. She added that the signage project began when she mentioned the tree at a Jackson Board of Aldermen meeting.

The project then went to the Director of Parks and Recreation Shane Anderson and the Park Board to design the sign. A ceremony was held on Tuesday, Aug. 31, to celebrate the installation of the new marker.

“Leland and I are thrilled that this beautiful tree now has a commemorative sign and all who see it will be reminded of a small but important part of our history,” Bev Nelson said.

Bev and Leland Nelson said they are hoping to help the Park Board add a bench or picnic table, as well as more landscaping, to help people enjoy the area around the historic tree.

In addition, Assistant City Administrator Larry Koenig has taken on the task of using the seeds from the tree to grow additional saplings. Sander added that he hopes to be able to plant one of the new trees in his son Sam’s yard in Nashville, near Andrew Jackson’s home.

“Jackson is very much like this tree,” Bev Nelson said. “In its infancy, it was very small, but it has continued to grow larger and more beautiful every year. The same is true of our city. We started out very small in 1814, but we have grown into a strong, vibrant community with an amazing future ahead of us.”