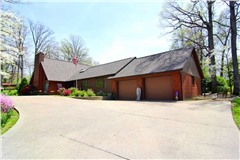 The Penzel house at 1011 Jackson Trail is one of the most iconic houses in the Jackson area, with thousands visiting the house over the years through Christmas house tours and other charity events. But for Linda Penzel, who lived in the house for 17 years with her husband Gene, the house was a home.

“There is such wonderful happy memories here,” Linda said. “Some people come in and look at it as a upscale house, but it’s really a home.”

Her fondest memories are from Christmastime, when there was a tree in every room and grandchildren were running through the house. “We had a lot of good, good times here with the kids,” Linda said.

Linda’s first impression in seeing the inside of the house in 2001 was that it was huge. At the time, both Gene and Linda were divorced and had only gone on their first date three days before. Linda said Gene had set up a candlelit dinner in the living room but the house had very little furniture besides the table and a small, orange couch.

During the date, Gene and Linda sat and talked for a few hours when Gene excused himself and returned with a ring. “He came back in and knelt down at the couch and said, ‘Linda, I have fallen in love with you, would you do me the honor of becoming my wife,’” she recalled. “He had this beautiful diamond ring and I was shocked. I was floored.”

Linda admitted that she had feelings for him, but didn’t think she would ever remarry. She told Gene that she didn’t want him to regret this proposal but if he still wanted to ask at the end of the week, she would say yes. When Friday came, Gene said he wanted to marry her “more than ever.” A month later in the very same room that Gene proposed, the couple were married.

Gene, who died in November of last year, spent his teenage years growing up next door to the land where the house would be built with his parents Carl and Mettie Penzel. Gene bought the land from his father to build the house after he came back from serving in the U.S. Navy in 1959 and resumed working at Penzel Construction.

“He took out of his Navy check and he started paying his dad and he bought the lot and it just sat here for several years,” Linda said. Gene started building the house with his first wife, Sue, in 1988.

“I’m sure the neighbors were tickled to death to get this lot cleaned off,” Linda said. “They came in, took a lot of trees out because the lot was nothing but trees and started building.”

Sue was an organ player, so the house was designed around an organ that was installed at the center of the house, overlooking the living room. Linda said the whole second floor loft was filled with organ pipes.

Because of the organ, a sound system was installed and every wall had soundproof installation. “Gene didn’t want to bother the neighbors,” Linda said.

The house was also built with two porches, a water garden, custom cabinets, imported tile from Italy and Germany and a zoned air conditioning system with four units throughout the house.

Linda said that despite it being a residential house, because Penzel Construction built it, the house was built with commercial standards. Solid wood doors were used throughout the home and steel beams were used to frame the living room.

Linda said the solid wood doors helps keep fires from spreading quickly and the steel beams were used to keep the house as resistant to the elements as possible.

“If there is ever an earthquake, this is the house you want to be in,” Linda said. “In the ceiling, the beams are covering the steel. Gene built it as earthquake resistant, like he did in the commercial buildings.”

Linda added that the house is even good when it snows, being so close to Hwy. 25 and in walking distance from a grocery store. “It’s a really great location,” Linda said. “It’s even quiet – you don’t hear a thing.”

She added that the house is still in great condition and will be standing “a long, long time.” Besides the organ being removed and donated to a church in Arkansas, there have been no changes to the house besides a few coats of paint.

After Gene died, Linda moved out to the “farmhouse” they built at the Pinecrest Azalea Gardens right before he passed away. Gene died three weeks before the new house was finished.

Despite the new house at the azalea gardens being smaller than the one on Jackson Trail and the fact that she misses her old bathtub, Linda said she wanted to honor her late husband’s dream of living in that farmhouse.

“Home was where he was and I see Gene in that house,” Linda said of the farmhouse. “That farm was his life and he lives on in that house.”

Linda has put the Jackson house for sale, with a listing price of $299,000. She said they are selling well below the assessed value of the home. The house cost just under $300,000 to build back in 1988, when construction material and labor were much cheaper than it is now.

Deb Thurman, who is the realtor for the property, said, “You couldn’t even come close to building this home for anything near that amount today – not in the city of Jackson and certainly not using the material or mirroring the quality of construction that they did when it was first constructed. Everything about this home well exceeded building standards and it is still very evident today too in every aspect of this dwelling.”

Linda said the house would be great for families or for those who like entertaining.

Whoever lives in the house next, Linda wants them to create their own memories there. “It’s a fun house,” she said “It should last them a lifetime.”
Correction: A previously published version of this article included an incorrect address of the house. The Cash-Book Journal regrets this error.
In this article: