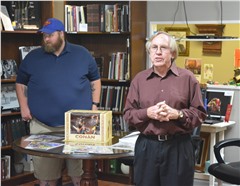 Roy Thomas, former editor-in-chief of Marvel Comics and Jackson native, was back in town for his 60th Jackson High School reunion and was met with a warm reception at the Cape Girardeau County History Center on Friday night.

The history center’s former intern Michael Archer, who created an exhibit featuring Thomas called “When History and Comics Collide,” reached out to Thomas in the spring and he consulted on the exhibit.

Archer, who was getting his master’s degree at Southeast Missouri State University, said working with Thomas was incredible and him coming to visit was more than he ever dreamed when he sent Thomas an email asking for advice on the exhibit.

Thomas, who hadn’t visited Jackson much since his mother died, was greeted by old classmates and those he knew when he was as young as three.

Thomas was born in Jackson and lived here untill he was around 20 and received an education degree from Southeast Missouri State University. After working as a teacher for a few years, Thomas started a career in comic in New York, writing for both DC Comics and Marvel.

Thomas was Stan Lee’s first successor as editor-in-chief of Marvel Comics and helped co-create many Marvel characters that are still popular today. Thomas said he is one of five people who helped create the X-Men character Wolverine.

Having realized that around 10 percent of Marvel’s audience was Canadian, Thomas decided it would be good to have a Marvel character from the country. He also created the name and the description that he was short but fierce. Thomas, who was working on the Conan the Barbarian comics at the time, didn’t think that was a good property to introduce the character so he gave Wolverine to writer Len Wein, who was writing the Hulk comics at the time.

“If I had known he would be so famous, I would have written the comic myself,” Thomas said.

Thomas credits Wein and the artists who first drew the character with everything else that made the character stand out, though Wein did use the fictional metal that Thomas had created, adamantium, for Wolverine’s claws.

Although Thomas says he mostly wrote for characters others created, he had a hand in creating over 100 different characters in the Marvel universe. In recent years, more and more of those characters have come to life in movies and television. He created the original Defenders team, as well as the characters Iron Fist and Luke Cage, now used in Netflix shows.

He also co-created both Ultron and the modern Vision, used in “Avengers: Age of Ultron,” and Valkyrie and the Grandmaster, used in “Thor: Ragnarok.” Thomas also had a hand in creating the breakout M’Baku character used in “Black Panther.”

“To see things on the big screen is really wonderful,” Thomas said. “Some of the things that they do I like better than others, but I’ve become a real fan of the Marvel movie.”

He enjoys the movies he is less fond of, like the most recent “Avengers: Infinity Wars” which he calls “too cosmic for me,” because of the way they are able to translate the feel of comic book stories.

Thomas currently lives in South Carolina, and though he technically retired 15 years ago, he still keeps himself busy with comic-related work. He is the editor of the Alter Ego magazine, which chronicles the golden and silver ages of comic. Thomas has a book coming out in limited release in December called “The Stan Lee Story,” which Thomas describes as a career biography.

He is also working on graphic novel adaptations of the books, “Dances with Wolves” and “I Married Adventure.” The second book, which is about early explorer filmmakers in the 20th century, was first read by Thomas at the Jackson library. Thomas also mentioned that Marvel is in talks with him to write more Conan the Barbarian comics.