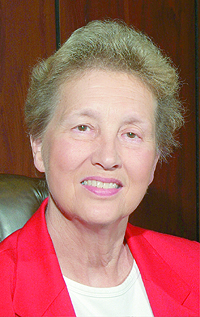 A bright light in the City of Jackson has gone out. Former Mayor Barbara Lohr died unexpectedly while vacationing in Florida June 15.

“I was always very impressed with her love and dedication to the City of Jackson; how she was involved with so many things around town,” said Mayor Dwain Hahs. “She always let me know what she was working on.” After leaving politics, Lohr volunteered her time helping Uptown Jackson and the Iron Mountain Railroad. “She did love history. She was always a teacher,” Hahs said.

Jackson had no stronger supporter than Lohr. The Uptown Jackson Revitalization Organization is honoring Lohr by decorating Uptown Jackson with wreaths.

“Barbara Lohr, a treasure to our community, has gone to her final resting place. She was one of Uptown Jackson Revitalization Organization’s most active volunteers, head of the Economic Vitality committee and involved in almost every event committee. She also was active at Whistle Stop Depot, Cape Girardeau County History Center, and bringing tourism to uptown Jackson.

“If you needed to know history about Uptown, Barb knew it. She was a staunch supporter of Uptown businesses, and worked hard to make sure they were successful.

“Our Uptown district has certainly lost a pillar. We are decorating Uptown in honor of Barbara. If you or your business would like to honor Barbara with a wreath in her tribute, please contact Janna Clifton at 573-200-6542 or uptownjacksonmo@gmail-.com.

“I was very sad to hear about the passing of Barbara,” said Alderman Joe Bob Baker. “She is one of the finest people I have ever known. Over the years she spent countless hours serving the City.

“She was so remarkable and her character was outstanding I remember when she lost her last election for mayor, when we saw the final results, her comment was that there are other ways to serve her city. She never stopped serving this community.

“She was a close friend to me and was always there when I needed her,” Baker concluded. “You don’t find many true friends in this world, but Barb was a true friend of mine. I will miss you, Barbara, and will always think of you.”

“I first met Barbara Clinton when we were students at Southeast Missouri State and her future husband, Bob Lohr, introduced us. Barb was a cheerleader and Bob was a football player. After graduation, Bob joined the Marine Corps as an officer.

“After a few years, I was coaching at Jackson when Bob took a job as football coach; thus Bob and Barb arrived in Jackson in 1963. Bob and I coached together for five years, then we took jobs with the Missouri Department of Education. We worked together there for six years. This put our families close together for 11 years.

“Now, fast forward some years and Barbara has become interested in Jackson city government, and I was involved in county government.

“Together again! Barb got elected mayor of Jackson, and that put us working together on many mutual city-county projects.

“Barb was a wonderful mayor and very protective of the City of Jackson. She dearly loved Jackson, the parks and Jackson football.”

The Cape Girardeau County History Center, where Lohr volunteered her time on Tuesdays, posted this on its Facebook page:

“The Cape Girardeau County Historical Society extends our condolences to the family and friends of Barbara Lohr. Barbara has served as a docent on our History Center team almost every Tuesday afternoon (with her dear friend, Vicki Crites Lane) for six years. Please note Barbara’s extensive bio in our March ‘Women of Regional History’ post.

“You loved and served others your entire life, dear Barb. We will miss you.”

Elane Moonier, retired features editor at The Cash-Book Journal and volunteer with the Iron Mountain Railway, said, “Barbara sometimes described herself as a professional volunteer at this stage of her life. We were very happy when she chose the train as one of the many places she volunteered.

“She was just a natural when it came to entertaining the passengers and was always a big promoter of our town. Barb loved history and she embraced the role of Zerelda James and told the story of the James family countless times on the train, then defended her boys, Jesse and Frank, when they came to rob the passengers.

“She thoroughly enjoyed playing a variety of characters in the murder mysteries and never hesitated to take on a new role, whether it was a cook on a pirate ship, the wife of a gangster or a singing member of a washboard band.

“We all laughed together and had a great time. She often said that she volunteered at the train because it was just plain fun. We were so lucky to have shared this time with her as part of our train family.”

“Our hearts are saddened at the loss of our good friend, Barbara Lohr, who gave thousands of hours of volunteer time at the train. We shared so much laughter and joy with Barb as she took on many roles.

“In addition to Zerelda James, the 6-foot tall mother of outlaws Jesse and Frank James, she was Olivia, the faithful wife of gangster Bugsy Malone, who eventually poisoned him. She was Glinda the Good Witch, a social worker with a drinking problem. She was Prudence Highwater, temperance lady who shut down the Cactus Gulch Saloon. She was the Christmas Elf who brought every child to sit on Santa’s lap. She was a rowdy 1950s rock and roller.

“She faithfully manned the gift shop every Saturday, and we chastised her when she was absent because her shoes were too big to fill. Her spirit will always be with us here at the Iron Mountain. Our prayers go out to her family who are her greatest treasure.”

Elane Moonier wrote a feature story about Lohr for the Jan. 30, 2019, “Hometown Proud” special section in the CBJ. We reprint much of it here with edits to bring it up to date and reflect her passing:

When it comes to years of community service and dedication to the Jackson community, there are few who could hold a candle to Barbara Lohr.

In the 57 years she has lived here, she has given countless volunteer hours to numerous organizations, served as the first female mayor of the town, and worked tirelessly for the growth and betterment of Jackson.

Originally from Sikeston, Barbara came north to attend Southeast Missouri State University where she earned her bachelor’s degree and master’s degree. After graduation, she married Bob Lohr. When he received a medical discharge from the Marine Corp, the couple settled in Jackson, where he accepted a position as a teacher and coach.

Barbara had been active in Girl Scouts in Sikeston and became a troop leader here right away. A year later, she became neighborhood chairman, and with the help of other leaders, worked to establish the first Girl Scout Day Camp in Jackson.

Barbara was also busy at Immaculate Conception Church where she helped organize the first Sunday School for four and five year olds. When their two boys, Jim and Lane, were old enough for Scouting, she became a troop leader for Cub Scouts. When their daughter, Kathy, was old enough, Barbara started working with Girls Scouts again. She began teaching at Cape Vo-Tech when their children were in school.

She was inspired to attend the city’s Planning and Zoning Commission meetings when a zoning issue came up in the neighborhood, and when an opening came up on the committee, Mayor Paul Sander appointed Barbara to the board, where she served for the next 12 years, five of them as chairman of that board.

When the alderman for her ward decided not to run, Barbara put her name on the ballot and was elected to City Council and served for five years. When Mayor Sander decided not to run for that office again, many in the community and on the city staff encouraged Barbara to run. She won the election and served four terms as mayor for a total of eight years.

After she no longer held office and had been retired from teaching, Barbara didn’t slow down. She did a great deal of volunteer work. In addition to her volunteer work with the train, the history center and UJRO (as already mentioned), she was a longtime member of the Noon Optimists, having served on the board and as president. She was a P.E.O. member and has served as secretary, vice-president and president. She volunteered at the Food Pantry and in the office at Immaculate Conception Church.