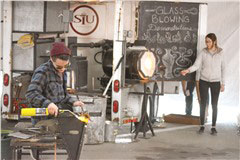 Saylor said the demonstrations, held on Court Street near the Jackson courthouse, were able to show people from this area how much work and time goes into glass blowing. “There’s a huge learning curve at the beginning, and during that learning curve you break a lot of stuff in the beginning,” She said. “You get used to not being attached to the thing on the end of the pipe until it’s in the box.”

Saylor said they are only able to travel with Aunt Gladys II three or four times a year, but it provides a great opportunity to share the art of glass blowing and promote SIU’s program.

“It’s really great because we are always trying to inspire people everywhere,” Saylor said at the event. “There were a bunch of high school students here earlier this morning, and I think its pretty great that they’re seeing glass.”

She added that it was great to talk to attendees of the event about how it works and the different techniques they were demonstrating. Saylor joked that as a teacher, she loves getting questions.

Kobayashi and Szidik also made their own pieces throughout the day, sharing tips and explanations of what they were doing. Saylor said traveling to events with Aunt Gladys allows her students to work more on their craft for an extended period of time and get better as artists.

She added that Szidik, who has only been glass blowing for two and a half years, attended his first Aunt Gladys II event after just a semester. “I think without that, he may not have continued on,” she said.

The event hosted by the Uptown Jackson Revitalization Organization also included specials by Uptown merchants and food offerings including from “The German Cook” Christian Voigt.

Glasswork from Saylor was available for purchase at Cobblestone Corner, and glass-blown art from the SIU program (including work by Kobayashi and Saylor) was on display at the Cape Girardeau County History Center.

Craig Milde said the February annual event allows UJRO to highlight area artist, activate uptown in the winter months and provide educational community outreach to Jackson. He added that planning will start soon for next year’s event and that he hopes they continue to “keep pushing the boundaries a bit” each year.