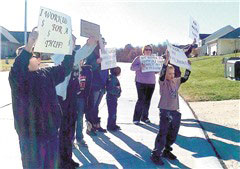 It was not a happy Thanksgiving for about 40 employees of Semo Options Home Care in Jackson.

After more than 25 years in business, the company unexpectedly shut down and no one received paychecks Thanksgiving weekend for their last two weeks’ work.

Webb, who worked in the office at 1404 Old Cape Road, said a letter from the Internal Revenue Service arrived in mid-November, stating the IRS had a $230,000 tax lien against the company. (Federal taxes had been withheld from workers’ paychecks but had not been sent in to the IRS, Webb said.)

According to Webb, Company CEO John Duer told the office staff he was aware of the lien but he would work things out. On Nov. 12, Duer told his employees that he was working on a merger between Semo Options and Grace Reliant, another home health care company run by his brother. The merger never happened.

The office staff showed up anyway, to get the word out to the nurses and aides that the company had closed. “On Wednesday the 15th, we called clients and employees. A few wanted to talk to John. He took one call. After that, he didn’t talk to anyone,” Webb said.

The 120 clients of Semo Options were left in the lurch. They were not given a list of other home health companies to service their needs, as required by Medicare. They suddenly found themselves without care. The company also failed to notify Medicare 21-30 days in advance that it could no longer service its clients, as required.

Susan Niswonger, a Jackson resident, was fortunate. Her helper, Nicole McLard, was already working part-time for Bootheel In-Home Care Services and CDS in Scott City (in addition to working at Semo Options).

When Niswonger learned Semo Options closed, she called McLard and McLard contacted the State Department of Health and Human Services to switch Niswon-ger’s care to Bootheel. She was able to continue receiving care from McLard.

The Department of Health and Senior Services must approve the change when clients switch companies.

Niswonger, who is disabled, was a CDS (Consumer Directed Services) client of Semo Options. As such, she could hire anyone she wished to help her. She liked McLard and wanted to keep her when Semo Options closed.

When enrolled in CDS, the client is serviced by a helper from an in-home service company. Medicaid pays the in-home company for the helper’s work. Out of the money received from Medicaid, the company is supposed to pay taxes, insurance, social security, etc. However, if the company fails to pay the payroll taxes, the IRS will go after the CDS client.

Laura Barr, a CDS worker with Semo Options, helped her grandmother three hours and 15 minutes a day, seven days a week. Because Semo Options did not pay Barr’s taxes to the IRS (even though they were withheld from her paychecks), her grandmother recently received a bill from the IRS for $2,074.62.

Other CDS clients are receiving similar bills from the IRS. Some may not pay the bills, thinking they must be part of a fraud. The clients may be unaware that when they signed a power of attorney, they agreed to be responsible for those unpaid taxes.

Barr was able to postpone the payment of the delinquent tax until March 24, 2018. She’s hoping someone will make Semo Options or Duer pay it before then.

Niswonger has not yet received a tax bill from the IRS but is worried about how she will pay it.

Eight former workers and their children picketed outside Duer’s home in Cape Girardeau Saturday, with signs demanding their money.

“You took my Christmas,” said one child’s sign. “I worked for a thief” said another. “Pay what’s owed” said a third.

Their protest lasted 20 minutes until police told them they needed a parade permit to protest.

“We will hire Semo Option employees on the spot,” said Darla Hughes, staffing coordinator for Bootheel. Her company can always use more workers (and their clients). She said home health companies “pop up all the time. It’s highly competitive.”

Whether there was criminal intent or this was simply a case of mismanaged funds and business failure may be a matter for the courts to decide someday.

But for now, there are a lot of people hurting because of a company that was supposed to ease their pain. Semo Option’s Web site states, “We are a family owned company that has been providing quality in-home services to Southeast Missouri since 1991. That’s nearly 30 years of helping seniors live a better quality of life, and most importantly … helping them to remain independent in the comfort and safety of their own home. We pride ourselves on meeting the healthcare needs of those we serve and will go the extra mile to meet those challenges with you.”

Two of Saturday’s protest signs sum up matters as workers and clients are moving on: “We work to support our family — pay what’s owed” and “Our clients deserved better.”