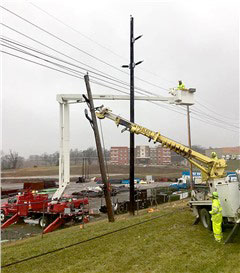 While most of us were asleep in the wee hours of Saturday morning, an EF-2 tornado whipped through the Center Junction area, damaging buildings and snapping power poles, plunging the city into darkness.

At 1:45 a.m. Jackson City crews were made aware of a power outage throughout much of the city.

The Jackson Police Department and Jackson Fire and Rescue responded quickly to reports of debris in the area of Birk Lane near Center Junction.

Upon arrival, crews found a camper trailer on its side, damage to four building structures, and a substantial amount of damage to one of the City’s electric transmission lines along East Jackson Boulevard.

Two of the poles located just outside the nearby substation had broken in half, knocking out one of the city’s two main transmission feeder lines.

Crews switched all substations over to the other feeder line until the poles are replaced and the circuit was restored and operational.

As utility poles and transmission lines continued to be replaced Saturday afternoon, the City appreciated Jimmy John’s of Jackson and Mrs. Don Schuette for bringing food and water to the electric line crews who had been working since early in the morning.

Pat Spoden from the National Weather Service in Paducah tracked the tornado’s damage from Jackson’s Center Junction to the Mississippi River, a path 10 miles long. Damage was mostly to trees, outbuildings and shingles.

Winds were estimated to be in excess of 125 mph near Crader Tire in Jackson.

All electrical repairs were made by 10 p.m. Saturday, but storm debris was still being cleaned up on Monday morning.