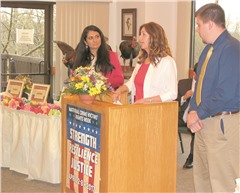 One by one, people walked to the front of the room, selected a long-stemmed carnation from a table, turned to face the audience, and said a few words about victims of crime they knew and loved.

Now in its 14th year, this ceremony is sponsored by the crime victim advocates of the Cape County Prosecuting Attorney’s Office. It was started by Beth Garoutte in 2003. Garoutte retired earlier this year but the ceremony continued under her replacements, Mary Ann Castillo and Aaron Floyd.

“After 17 years, Beth finally retired this past February,” stated Kim Moore, an officer with Missouri State Probation and Parole, who worked closely with Garoutte organizing past ceremonies. “We thought it was the perfect time to build on the foundation Beth left behind.”

Guest speaker Kendra Eads, executive director of the Beacon Health Center in Cape Girardeau, described the work her agency does with both children and adult victims of domestic violence.

Services provided by her agency include conducting forensic interviews, conducting medical exams (and letting victims know everything is okay with their bodies), and providing support to victims (being victims advocates).

“We work closely with the prosecutor’s office and law enforcement,” Eads said.

“One way to change the culture of victimization is to speak up and have programs like this,” she continued. “You make things public and we’re not going to keep this culture of silence. I’d love to be able to close the doors of our agency because no one needed us anymore.”

Cape County cime victim advocates will help not only the victims of the worst crimes, but also victims of misdemeanors, he said.

It is hoped that more time can be spent with victims of domestic violence, to help them before the violence gets worse, and possibly prevent aggressors from causing more harm in the future, he added.

Crime victim advocates plan to coordinate their efforts with other agencies such as Alcoholics Anonymous, the Women’s Shelter and the Beacon Health Center.

Limbaugh then described some positive changes in the criminal code. “New things are happening in the criminal code that give us bigger and sharper teeth,” he said. The new law, which went into effect Jan. 1,  includes “much more severe punishments for violent sex cases,” he said. In addition to keeping criminals locked up longer, it’s hoped that this will have a deterrent effect.

One of the biggest changes in the law is that propensity evidence is permissible in child sex cases. That means prosecutors can bring up previous instances when a suspect has been arrested for similar crimes. This will help the jury understand that the current case is not the first time the defendant has committed such a crime. “It helps the jury understand who that defendant is. It has changed the entire landscape of our child sex cases,” Limbaugh said.

Because of this change, fewer defendants may choose to go to trial, so fewer victims will have to be put on the stand to testify.

There is another change that prosecutors are seeking in the law. Currently, during the “discovery” process, prosecutors must provide the addresses and phone numbers of victims and witnesses to defendants’ attorneys, so they can depose them before going to trial. That unfortunately gives perpetrators of domestic violence access to their victims and witnesses.

To protect innocent victims and witnesses, it is suggested that the law be changed so that those witnesses and victims must be made available for depositions (without the perpetrator present), but their contact information would be kept private.

Another law coming down the pike is a bill sponsored by State Rep. Kathy Swan of Cape Girardeau that would not allow convicted sex offenders to visit certain places, such as parks and public swimming pools, to keep them from preying on people, Limbaugh said.

Mitch and Diane Miller have attended every flower ceremony since 2003. Diane’s brother, Ralph Lape, was murdered in 2002. “I got a feeling that as time went on, people will forget,” Diane said as she took a carnation. “That’s not the case. In Cape County there is a time of year when they remember victims.”

“Every time you tell your story you heal someone else,” Castillo told the gathering as she took a carnation.

“As long as one person receives a benefit from this program, then it’s worth it,” said Moore in her closing remarks.