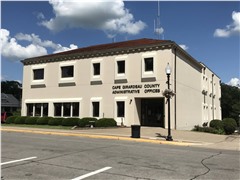 Watkins spent the past 20 years serving the Cape Girardeau
County Community Emergency Response Team (CERT) Alliance. He joined the CERT
Alliance as a volunteer in 1999. In 2008, he took the position as training
coordinator. In that position, Watkins “demonstrated outstanding leadership and
vision in expanding the CERT program by educating and promoting emergency
preparedness and safety,” states a Commission Commendation presented to Watkins
by Presiding Commissioner Clint Tracy on Sept. 9.

The commendation also states Watkins “went above and beyond
to equip people in our community for disasters and hazards in Cape Girardeau
County.”

Watkins also has served as the community development
coordinator at the Community Caring Council, community coordinator of the 21st
Century Community Learning Center, program coordinator for United Way’s Success
By Six, and health and safety instructor for the American Red Cross.

Kirchhoff spent the last 38 years serving the East County
Fire Protection District. For the past 11 years, he was fire chief and
president of the Cape Girardeau County Firefighters Association.

According to the Commission Commendation which Tracy
presented him, Kirchhoff “demonstrated outstanding leadership and vision in
developing a professional team at the East County Fire Protection
District.” He “has long been a strong
advocate for fire and injury prevention both for the public and the
firefighting staff” and “has provided excellent stewardship, leadership, and uncompromising devotion to duty throughout his tenure.”

Both Watkins and Kirchhoff were wished good health and
happiness during their retirements.

During Thursday’s meeting, Paul Koeper reported that work on
the south parking lot may begin this week.

There has been some discussion with the contractor about
building the connection between the new courthouse and the jail. A meeting will
be held with the Sheriff’s Office as to how the connection will take place. At
that time, they will have to penetrate the wall of the jail. The connection is
expected to be made in the next three to four weeks.

Meanwhile, sheet rock is being hung and, before long,
windows will be installed.

• New park pavilion: The Commission agreed to solicit bids
for materials for a new pavilion to be constructed where the wooden pier once
stood along the lake shore in South County Park.