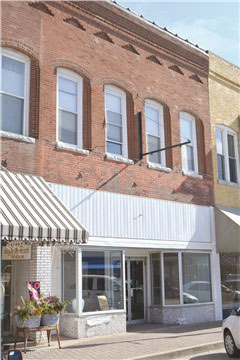 “In our archives, we have unbelievable small manuscripts, books and library materials,” History Center Director Carla Jordan said. “Right now, we don’t have a great place for anybody to use them. I feel a responsibility, as the Cape Girardeau County Historical Society, to make what we have available to researchers.”

Jordan said the idea of adding the research center was due to the fact that the History Center is no longer a quiet place to research. In addition, renovations have recently added a restroom in the center, which has taken space that previously was used by researchers.

“In some way, we have become the victims of our own success and we want to continue to be,” Jordan said. “As we developed integrity in the region and as people know that we are here, people have continued to bring us their treasures and their paper documents.”

The center has historical books that were previously housed at the old Jackson Public Library, as well as a Civil War series that documents all Union and Confederate battles. The center also has small manuscript collections on local churches, schools and famous citizens.

“We have a wonderful small manuscripts collection that was donated since I’ve been here of the founding of the Iron Mountain Railway in Jackson, when it became more of a tourist location,” Jordan said.

Jordan added that they currently have genealogical documents and the new research center will have Ancestry.com for public use. “It will be a strong genealogical library and genealogists are always welcome,” she said.

The research center will also be able to hold small meetings for the historical society’s board or for other local historical organizations.

Operating hours have not been finalized for the research center, but Jordan said she expects there to be one or two days a week where the new center is open to the public and the center will also be available by appointment throughout the week.

“I can’t rationalize not opening to the public, but I do think appointments will be needed because when you’re researching, you want that one-on-one attention and you need it to be quiet,” Jordan said.

Jordan said the new center should only enhance the History Center, which will continue to be “the hub” and the center of public events. In addition, the display windows at the front of the research center will be used to preview various exhibits at the History Center.

Jordan said the historical society has worked with the building’s owners, Paul and Deb Hoffmann, to get the building ready, and the interior has already been restored. Jordan said they will be able to move some of the furniture they already have at the History Center, and the research center could be ready for visitors as early as March 15.