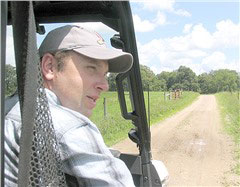 U.S.
Rep. Jason Smith, no stranger to agriculture, having grown up on a farm, toured
the Knowlan Family Farm in Burfordville July 30.
It
was the second day of Smith’s tour of 30 unique agriculture facilities across
the 30 counties he represents in the 8th District. His desire was to highlight
the robust role that agriculture and farming play in this area.
Knowlan
Family Farm, 3243 Highway 34, has become a tourist destination after just three
years of existence.
A
market building near the highway offers plenty of parking for customers who
come for homegrown blueberries, blackberries, nectarines, peaches, apples,
pears, tomatoes and pumpkins, along with grass-fed beef from 60 head of
Scottish highland beef crossed with red Angus that is sold by the cut, by the
quarter and by the half.
The
market also sells watermelon, sweet corn and other produce grown in other area
farms. “We try to help our local economy,” said Jack Knowlan, one of the
owners.
Fruit
trees in the orchard were planted in 2013 and the market building was
constructed in the fall of 2016. Customers can buy fruit in the market that is
already picked or they can ride into the orchards and pick their own. Trees
that have ripe fruit are marked with a long orange ribbon.
Apples
that don’t make the grade are squeezed into fresh cider which has no
preservatives and isn’t pasteurized. “It’s so popular, we can hardly keep up,”
said Jack, a retired worker’s comp judge who still does some legal work for a
Poplar Bluff attorney in his Cape Girardeau office.
He
and his wife, Bonnie, a retired Jackson R-2 school principal, have made the
farm into a family business. “Six members of the family work here,” Jack said.
There are other employees as well, including a lot of high-school age workers.
The
farm now has 315 acres, which includes the original 146 acres of Jack’s family
farm.
When
the Knowlans’ son, Garrett, a U.S. Air Force major, was killed by accident
during a survival training program on Oct. 11, 2012, it hit his parents hard.
Jack
said he planned to retire, sell everything and move to Montana to fly fish. If
he had done that, the family would have scattered.
Instead,
he and Bonnie held onto the farm and used their retirement incomes to enlarge
and develop it with a lot of physical labor provided by their son, Spencer.
Family members have been drawn together as they work the farm. Jack says it
seems to be a proper tribute to Garrett.
Spencer
began last year to build a wooden children’s play area with platforms, swings,
slides and more. It’s right next to the petting barn, where customers can feed
pygmy goats. Parents may purchase a wristband for their youngsters, who can
then play as long as they want. Meanwhile, parents (and their children) can
enjoy one of the newest treats — delicious ice cream from a Wisconsin dairy.
“We’re
big in agri-tourism,” Jack told the Congressman. “We want people to have fun.”
During
the first year of operation, they had school field trips come two days a week.
This past year, it was increased to five days a week.
The
play area has kept customers on the grounds for two to three hours instead of
20 minutes. And ice cream now makes up 10 percent of total sales on any given
day.
The
latest addition to the farm is an event center called “Knollcrest” overlooking
a lake. It was the brainchild of Spencer’s wife, Lara. Just recently completed,
it includes a large meeting room for receptions that looks like a mansion on
the outside and has a whitewashed barn look on the inside. It has a fully
equipped kitchen for preparing food and separate dressing rooms for the bride
and groom. Nearby is a chapel that also has a barn look. The drop-down side
curtains can be left up for open-air weddings or can be closed and the
structure can be heated or cooled with HVAC, so it can be used year round.
The
first wedding was held there this past Saturday. Knollcrest is already booked
for the remainder of this year. There are just 14 weekends still available in
2020 that don’t have deposits down.
Smith
asked Jack what his biggest challenge was, and he said the operation was “very
labor intensive.”
As
for help from the government, Jack said USDA funding was acquired to help
offset the costs of setting up paddocks for the cattle. But for the most part,
he thinks the best thing the government can do is stay out of the way and let
his farm operate.

Knowlan
Family farm is open 9 a.m. to 5 p.m. Monday through Saturday and Sunday
afternoons in October when apples ripen.