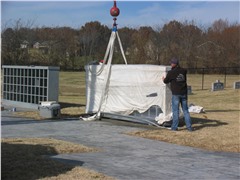 Do you need a dignified place to store the ashes of your cremated loved one?

Russell Heights Cemetery in Jackson now has three columbaria that are each about five feet tall, 13 feet long and have 48 niches.

Each niche is approximately a cubic foot. Each niche has a thin black granite inner door which will be sealed after the urn is placed inside. A second, thicker black granite outer door may be engraved with the name of the deceased and certain vital statistics such as birth and death dates before it is installed next to the inner door.

The 7,500-pound gray granite columbaria were set in place Wednesday using city workers, a crane truck and employees of Liley Monuments, the company that created the columbaria for the City.

The columbaria are located next to the recently built gazebo.

An outdoor service may be held under the gazebo before an urn is placed in its niche in the columbarium.

A columbarium is similar to a mausoleum; both offer final places of rest above ground. A mausoleum, however, stores bodies while a columbarium stores urns with cremated remains.

The City has not yet set the rates for purchasing a niche or decided upon rules regarding font size and styles for engraving the doors.