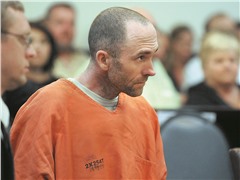 Former Cape County Sheriff’s deputy James Clay Waller, II, 47, will spend 35 more years in prison for the 2011 murder of his wife, Jacque, and for hiding her body in Illinois. He was sentenced on federal charges last week.

Waller, who was a Jackson resident, is already serving a 20-year sentence for the murder. He pled guilty to amended second-degree murder charges on June 6, 2013. (He was originally charged with first-degree murder and two counts of tampering with evidence. The two lesser charges were dropped.)

In exchange for the lesser charge, Waller provided authorities with the location where he buried Jacque’s body, the body had to be recovered, and he had to give a full description of the murder. Those conditions were met.

Many people were upset at the lenient sentence at the time, but authorities believed this was the only way the body could be recovered so Jacque’s family could find closure. (Second-degree murder carries a sentence of from 10 to 30 years; Waller’s 20-year sentence was concurrent with time served for making Internet threats against Jacque’s sister; at the time of the plea bargain he had 19 years remaining to serve.)

“This is not what you deserve, but it will have to do,” Judge Benjamin Lewis told Waller as the judge approved the plea bargain in 2013.

“I did not want this deal,” Cheryl Brennecke, Jacque’s sister, said in a witness impact statement at the time. However, she knew Jacque’s parents and children “needed to bury her.” She added, “I needed you to suffer for the rest of your life. We only got to bury her because it benefitted you.”

“Today brings about a bittersweet ending of one of the high profile cases in Cape Girardeau County,” Cape County Sheriff John Jordan said in a press conference following Waller’s court appearance in 2013. “It was bitter because none of us here feel Clay Waller’s punishment fits the crime,” Jordan explained. “While Clay was sentenced to 20 years, Jacque was sentenced to death, and the family was sentenced to life without Jacque.”

The ending was sweet in that Jacque’s body was recovered so it could have a proper burial.

“Clay Waller didn’t get what he deserved, but in my opinion, he deserved everything he got,” Jacque’s father, Stan Rawson, said.

Assistant Prosecuting Attorney Angel Woodruff told those in the courtroom in 2013 that the plea agreement was not binding upon other agencies. The State of Illinois or federal government could bring additional charges.

The following details of the murder came to light during the federal prosecution:

At his plea on Oct. 5,  2017, Waller admitted he had on numerous occasions threatened Jacque, telling her that if she divorced him, she would be signing her death warrant.

On May 31, 2011, the day before he and Jacque were to meet with her divorce attorney, Waller dug a grave in which to bury his wife on the Illinois side of the Mississippi River near Devil’s Island. He then spent the night with his girlfriend in Illinois.

The next day, June 1, 2011, he traveled from Illinois to Cape Girardeau to attend the meeting with Jacque’s attorney.

When Waller traveled in interstate commerce from Illinois to Missouri that day, he did so with the intent to kill his wife.

Following their meeting with the divorce attorney, Waller lured Jacque to his home in Jackson, claiming she needed to pick up her son, one of the couple’s five-year-old triplets, who had been spending a few days with his father. The child was not at the residence.

Once inside the residence, Waller strangled and beat Jacque to death. He then transported her body across the Mississippi River by boat and buried her in the grave he had dug the day before.

The crime of Interstate Domestic Violence was enacted by Congress as part of the Crimes Against Women Act of 1994.

“Prosecuting violent crime is a top priority of the United States Department of Justice,” United States Attorney Jeffrey B. Jensen said. He said that at least one third of all women murdered in the United States are killed by domestic partners. That averages out to three women each day.

In the course of the federal investigation, authorities recovered the manuscript of a “tell all” book written by Waller titled, ‘If You Take My Kids, I’ll Kill You!’: The Public Confession of Missouri’s Most Notorious Wife Killers.

As part of the plea agreement, Waller agreed to forfeit any proceeds received or to ever be received from any contract relating to a depiction of his crime in a movie, book, newspaper, magazine, radio or television production, including the manuscript he authored.