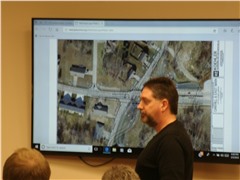 Stop lights are coming to the intersection of East Main Street and Oak Hill Road. In order to improve safety and increase the speed at which vehicles and pedestrians can pass through the intersection, the City is considering the possibility of squaring up the intersection so the streets meet at right angles.

During study session at the Feb. 5 meeting of the Mayor and Board of Aldermen, Chris Koehler of Koehler Engineering showed how this can be done by moving the southern part of Oak Hill to the east.

This will require that the City purchase some land and probably extend some private driveways so they will reach Oak Hill once it’s moved. “The impact to the southeast quadrant will be pretty severe,” Koehler said.

A squared-up intersection will provide “much better sight distance and pedestrian movement,” Koehler told the Board. He recommended the improvement because “traffic is only going to get worse.”

As that part of town is developed, and sidewalks are added between Lacey Street and Oak Hill, pedestrian traffic will increase. Improving the geometry of the intersection by taking the skew out of it will allow pedestrians to cross streets quicker. “It’s a safety thing,” agreed City Administrator Jim Roach.

Squaring up the intersection will add cost to the project. “Our next step is to ‘cost this out,’” Roach said. Once cost estimates are provided, the Board will decide if the improvement is worth the cost.

• Budget amendment: The Board approved amendments to the 2017 budget because certain funds exceeded their 2017 appropriations. This is an annual housekeeping event, as actual costs replace estimates. “The five overages are a minute percentage of our $35 million budget,” said Roach.

• Sanitary sewer: The Board agreed to pay Horner and Shifrin, Inc. of St. Louis $9,300 for engineering services for the Old Cape Road Sanitary Sewer Replacement Project.

• New electric meters: The Board accepted bid of Anixter Inc., of Mattoon, IL, for $55,000 to provide automated electric meters that can be read by radio transmission at the electric department instead of having meter readers go out and read meters at individual locations.

• Tax-free holiday: Jackson will participate in the Show-Me-Green Sales Tax Holiday April 19-25. No sales tax will be charged on energy-efficient appliances (air conditioners, furnaces, refrigerators, washers, dryers, etc.) that are purchased in Jackson on that weekend.

• Shipping containers: A public hearing was set for 6 p.m. March 5 to consider an amendment to the zoning code by adding regulations regarding the allowable uses of shipping containers in certain zoning districts.

A memo was presented that contained the recommendations of the Planning and Zoning Commission. The recommendation is to not allow shipping containers to be used for occupied structures — only for storage.

“Planning and Zoning studied it for quite awhile,” explained Janet Sanders, building and planning superintendent. “This is their recommendation for you. You’ll probably want to wait and see what’s said at the public hearing [before making a decision].”

Quinn Strong, a St. Louis developer with Capital Real Estate Group, spoke on behalf of using shipping containers for homes and offices. “I ask you guys not to close the door completely.”

“They exceed all building codes by two times.” he said. The inside and outside of the containers can be covered with other material so structures don’t look like shipping containers. “It’s hard to know what a developer has in mind,” he said. Using shipping containers creates less waste, Strong added. In one case, said, “The job site waste adds up to 19 pounds.”

• Zoning change request: Residents from Broadridge Subdivision presented a written request to remove residential uses from the O-1 (office) zoning district. (They are objecting to a proposed apartment building near them.) The Board of Aldermen passed the request to the Planning and Zoning Commission, where it will be studied and a recommendation made.

• Humane Society rate increase: The Board discussed in study session a request from the Humane Society to increase its charge to the City of Jackson for taking in animals from Jackson. The proposed increase is from $22,000 to $28,000.

Roach said in 2016, 387 animals were brought to the Humane Society from Jackson; 53 were delivered by the police department and 334 were brought in by citizens. Last year, the police turned in 27 animals and citizens turned in 150 for a total of 207.

Roach said more study is needed to make sure the higher rate is justified before making a recommendation to the Board.

The Board discussed in planning session an engineering proposal to install a monitoring system on water that enters the waste water treatment plant. (Water is monitored as it exits but not as it enters.)

This monitoring system will help the City narrow down where water is coming from (for example, if rainwater is entering the sanitary sewer system). If the excess water sources can be eliminated, it will add to the life of the treatment system, because it won’t be treating water that doesn’t need to be treated.