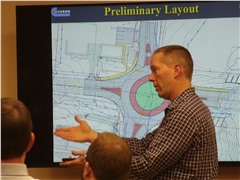 Jackson already has one roundabout on East Main Street. Plans are in the works to add a second one.

The Mayor and Board of Aldermen heard an update on the project from David Christensen of Cochran Engineering during study session Feb. 4, and gave a head nod for the firm to finish the design.

“It is comparable to the roundabout in town,” Christensen said. The project is estimated to cost about $825,000, not including the cost of land acquisition.

This new roundabout, like its predecessor, will not be perfectly round, but will be  slightly oval in shape. Because of its proximity to an apartment complex and a private home, preliminary plans call for the roundabout to be pushed to the east of the current four-way stop intersection. “We wanted to take as little as we could from the northwest and southwest corners,” Christensen said.

Preliminary plans call for five utility poles to be relocated to make room for the roundabout.

Mayor Dwain Hahs asked how long it will take to build the roundabout. Christensen said it will take about five months, depending upon weather. Hahs said it will be important to coordinate the construction period with the work MoDOT will be doing on East Jackson Boulevard at I-55. He did not want to see Main Street and East Jackson Boulevard both shut down for construction at the same time.

• Budget amendment: The Board approved an amendment to the 2018 City of Jackson budget, relative to funds exceeding their 2018 budget appropriations.

• Grant: The Board approved the application for a grant from the Missouri Department of Natural Resources to help develop ball fields in Brookside Park.

• Tax holiday: The City of Jackson will participate in the Show-Me-Green Sales Tax Holiday April 19-25.

• 911 dispatch: An intergovernmental contract with the County of Cape Girardeau to share the capital costs for a new 911 dispatch service was approved.

• Cemetery gazebo: The Board accepted the $40,056 bid of Boulder Construction, LLC, of Cape Girardeau, to build a gazebo in Russell Heights Cemetery.

• West Main Street: The Board authorized an agreement with the Missouri Highways and Transportation Commission for the State to relinquish a portion of West Main Street from Farmington to Highway 72 to the City of Jackson.

• Police station: Mayor Hahs announced that a ground-breaking ceremony for the new Jackson Police Station will be 10 a.m. Friday, March 8.

• Use tax: Hahs announced that Jackson city officials will discuss the request to charge a use tax (that will be on the April 2 ballot) at the Cape Girardeau Area Chamber of Commerce’s First Friday Coffee on March 1 at Isle Casino.

During study session, Callie Miller of Bold Marketing showed a PowerPoint program her firm has put together to help explain the use tax issue.

She said it’s important that city officials emphasize the following points when discussing the use tax:

~ 176 Missouri cities already have a use tax in place.

~ Use tax is a sales tax collected from purchases made outside of Missouri.

~ Jackson’s use tax will be the same as its sales tax — 2-1/2 percent — which is one of the lowest being charged by cities.

~ It is not a tax rate increase (the sales tax rate of 2-1/2 percent will remain the same).

~ 65 percent of the City’s revenue comes from sales tax. Sales tax revenue has been flat lately.

~ The additional funds from a use tax will be used to add lighting to East Jackson Boulevard between Walmart and I-55, pay the start-up costs for curbside recycling, and either upgrade or build a new swimming pool.

~ A use tax will level the playing field for city businesses that have to charge city sales tax on purchases made from their businesses.

Alderman Paul Sander said the City needs the use tax; it is not just something it wants. Funds from the use tax will help pay for current services that the City provides.

“We’re ready to start the next round of projects,” said City Administrator Jim Roach.

The second phase will be $4 million worth of projects to be completed over the next three years.

At its intersection with East Main Street, the City would like to add a left-turn lane on North Georgia Street to help traffic flow. Doing so would eliminate parking for about 60 percent of that block.

Affected property owners will be notified and will be able to address the Board at a future study session before any action is taken.