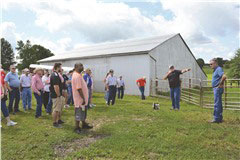 The first tour was held on July 18, 1979, after four years of discussion and planning. According to Jackson Area Chamber of Commerce President Brian Gerau, the tour is the longest agriculture tour in the state and possibly the nation.

Gerau credits the Chamber’s agribusiness committee for the tour’s success. “They have been a tremendous asset for the past 40 years, and I can’t wait to see what they do the next 40 years.”

The committee, currently co-chaired by Darrell Aufdenberg and Jeff Slinkard, runs the annual tour and began planning this year’s event this spring. Aufdenberg said the tour takes a lot a planning to find new places to go to each year.

“A lot of these places are real secrets and nobody knows that they’re there,” Aufdenberg said. “We get to see some farms that you don’t ever get to be on, unless you get personally invited. I think that’s the biggest reason we’ve stuck around.”

Aufdenberg, who has been involved with the tour for almost 30 years and has been chairman for about 20 years, said the event has mostly stayed the same over the years.

“We have some business leaders on the tour and we have some of our farmers on the tour – that’s stayed the same,” Aufdenberg said. He added that they always have some fresh faces on the tour, as participants in the Chamber’s Leadership Jackson and Development come every year.

The tour has stayed free over the years, with transportation, meals and drinks provided by sponsors. “We get a lot of support from the community,” Aufdenberg said.

One of the few things that have changed over the years is access to some agriculture sites in the area. “Some of the places we used to go, just because of liability and regulations, we can’t get into anymore,” Aufdenberg said. Despite that, the tour still goes to around four locations each year, and takes requests from the community as to whom they should contact for future visits.

The first stop on this year’s tour was the Meier Horse Shoe Pines Christmas tree farm and Gift Shop. Despite being open for only six weeks each year, the trees require year-round work.

The family-operated farm, run by Steve and Teresa Meier, has been open since 1988. The farm holds 20,000 trees, with 2,000-2,500 planted each year. The Christmas trees grow about a foot each year, meaning it takes around six years for a tree to be ready to be sold. “It’s not a get-rich-quick scheme,” Teresa Meier said of the Christmas tree business.

Steve Meier gave tractor-wagon tours of the whole farm and showed visitors how they trim each tree during the summer. Teresa Meier spoke about their gift shop and planning for Christmas, as well as showed how they put together wreaths using material from trees in the farm that wouldn’t sell.

The second stop was at the Zeller Farm in Jackson, which is a family-run Beefmaster cattle operation. Gregg Zeller said the farm includes 100 acres they own, as well as an additional 50 acres they rent. “You don’t see this type of cattle around here that much, and they’re one of the top ones in this area,” Aufdenberg said.

The third stop on the tour was the Knowlan Family Farm in Burfordville. The family-run operation opened in 2016 and offers local fruit, vegetables, grass-fed beef and various family activities. They grow 26 apple varieties – as well as peaches, nectarines, pears, blueberries, blackberries, pumpkins and more.

The agriculture tour was able to visit the farm’s Knollcrest addition, an event barn and chapel that will soon be open for weddings and other events. The tour’s lunch was the first event in the new facility.

During lunch, Dennis Vinson spoke about his work as chairman of the board for Missouri State Chamber of Commerce, and the board’s work for agriculture businesses in the state. Vinson is also the President and CEO of Signature Packaging and Paper, which was the fourth and final stop on the tour.

Signature Packaging in Jackson is a full-service corrugated manufacturer, servicing a variety of national, regional and local customers – including Procter & Gamble and Rubbermaid. The company has been in Jackson since 2006, and visitors were able to take a tour of Signature’s facility in small groups.