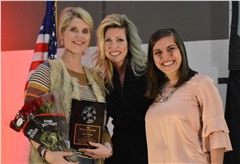 The Jackson Area Chamber of Commerce hosted its annual awards banquet on Jan. 21 with a record-breaking attendance of more than 540 people. The annual event honored area leaders and businesses and installed the Chamber’s 2019 Board of Directors.

The 2018 R.A. Fulenwider Award for service to the Jackson community went to Tom Ludwig. Ludwig is a former Cape Girardeau County assistant prosecuting attorney and Jackson city attorney. He has previously served as the president of the Jackson Area Chamber of Commerce, and Ludwig is currently involved with the Jackson R-2 School Foundation and Jackson Rotary.

The award winner is chosen by former winners of the award, and was presented by past winners Terri Tomlin and Billy Joe Thompson.

“If you’re going to get an award in Jackson, I think this is the most humbling and best award,” Ludwig said. “The fact that it’s voted by the prior Fulenwider Award winners means a great deal. I can’t describe how grateful I am.”

The first-ever Woman of the Year award from the Chamber was given to Sara Gerau. Gerau is a Farmers Insurance agent in Jackson and was instrumental in creating the Women’s Impact Network (WIN) programs in 2018.

SERVPRO of Cape Girardeau & Scott Counties, which cleans up fire, water, storm and mold damage, received the Business of the Year award. Owners Sandy and Richard Hastings accepted the award.

Bug Zero, which has locations in Cape Girardeau and Springfield, won the Small Business of the Year award. The business provides a variety of pest control including bed bug and termite treatments. The business has been a part of the chamber for eight years and is planning on expanding to a larger location in the area. Chris Horrell, the owner and manager of the Cape Girardeau location, accepted the award.

Aaron Olivas, of MOWear USA, won the Sam Roethemeyer Ambassador of the Year Award for the second year in a row. Olivas said being an ambassador of the chamber has been a great opportunity for him.