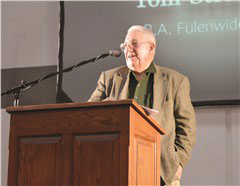 The Jackson Area Chamber of Commerce’s annual awards banquet, which honors area leaders and businesses, sold out for the first time this year. The event, held on Jan. 10, also included the installation of the Chamber’s 2020 board of directors.

The 2019 R.A. Fulenwider Meritorious Community Service Award was given to Tom Strickland. Strickland established Strickland Engineering in 1979 in the basement of his home in rural Cape Girardeau County and moved his office to Jackson in 2000.

The award winner is chosen by past recipients of the award, and was presented by last year’s winner Tom Ludwig. The award is named after the prominent civic and community leader R.A. Fulenwider and is given to someone who has made significant contributions to Jackson.

Strickland was also a part of establishing the Uptown Jackson Revitalization Organization and improving uptown Jackson. “The new sidewalks on High Street, the street lights – all of those things ought to have Tom Strickland’s name on them, because he did them,” Ludwig said.

Strickland said he and his family have been very well received by the Jackson community, and that has allowed Strickland Engineering to continue to grow. “I would recommend to anybody coming to this area that you’ll do well by starting in Jackson,” he said.

Kohlfeld Distributing, which has been a premium beer and beverage wholesaler in Jackson since 1975, was awarded the Business of the Year award. Mike Kohlfeld accepted the award.

Leet Eyecare, which has locations in Jackson and Cape Girardeau, won the Small Business of the Year award. Dr. Gregory Leet and Dr. Jake Leet accepted the award.

Dr. Beth Emmendorfer, the assistant superintendent of elementary and student services for the Jackson R-2 School District, received the WIN Women of the Year award. Emmendorfer started her 30-year career as a special education teacher and has served as an assistant superintendent for 14 years. She has been recognized across the state of Missouri for her advocacy in the area of special education.

Nate Gautier of First Choice Insurance received the Sam Roethemeyer Ambassador of the Year award. The award is given to someone who is involved with Chamber events and helps recruit new members for the Chamber. Gautier was diagnosed with cancer about a year ago and has recently had his six-month scans showing he is now cancer-free. He said that going through his cancer treatment helped him see that being a part of a community is important and the Chamber has helped him connect to others and give back to Jackson.

Michael Tornetto was awarded the Marybeth Williams Educator of the Year Award and was also given a $500 prize from the Jackson R-2 Foundation. Tornetto is director of the social studies department at Jackson High School.