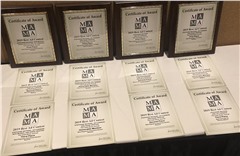 The Cash-Book Journal received 12 awards in the Missouri Ad Managers Association’s Best Ad Contest, including four first-place wins. The winners were announced at the Missouri Advertising Managers’ Meeting held on April 11-12 in Columbia.

The Cash-Book Journal also received an honorable mention for its ad content throughout its paper. To be nominated for this award, papers must submit three entire publications – two from specific months and one publication of the paper’s choosing.

The Cash-Book Journal’s staff would like to thank all our advertisers and readers for their continued support for our paper and local journalism in Jackson.