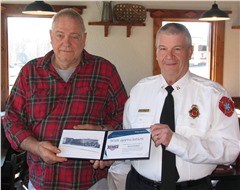 A captain in the Fruitland Fire Department has been selected as this year’s “Hometown Hero” by Modern Woodmen Chapter 18134.

Dennis Koeberl was nominated by the fire department for the honor. “He has excellent morals and is a wonderful husband and father,” explained Rebecca Volkerding of Modern  Woodmen.

“I just like helping people; helping the community,” said Koeberl as he was presented a certificate and $100 to be given to the charity of his choice Feb. 1 at the Pizza Inn in Jackson. The money will be donated to the Fruitland Fire Department.

The Fruitland Fire Department started in 1977 with 18 volunteer firemen. Koeberl was one of them. “There are only three of us [original firefighters] left,” Koeberl said.

When fires destroyed a Fruitland church and the C&G Feed Store, the residents of that area held a meeting and decided, “We need some protection around here,” Koeberl said. One of the strongest proponents was Vanita Jones, wife of Auctioneer Tom Jones and owner of Frontier Food Market at the time.

The group chose Marty Schuessler to be their first fire chief. Carl Reimann offered the use of his barn to house the pumper truck that was purchased. He became the assistant fire chief.

“In 1978 we built our first building,” Koeberl recalled. “We had one pumper and one tanker. The tanker was an old gas truck like they used to use long ago. We sand blasted it all down and got the old paint off, and then we painted it ourselves.”

The volunteer fire department existed on donations. The department asked residents to pay $100 per fire call.
Koeberl reflected back on how times have changed.

The volunteers often were at work when a call came in, but the fire trucks were parked at the station. Instead of taking time to go to the station, the wives drove the trucks to the fire and the firefighters (who kept their gear with them) went straight from their jobs to the fire. The women also ran the pumps.

If the children were home, they went along, and one of the wives would baby-sit while their husbands fought the fire.

Nowadays, children can’t even ride on fire trucks during a parade, because of insurance requirements.

Today, when the volunteers are notified of a fire, they head to the fire house to get their gear.

Another thing that has changed over the years is the communication. When the department first started, firefighters kept a telephone roster and each one, when he received a call, called the other firefighters on his roster until all received the message.

This system graduated to pagers. When they went off, volunteers headed to the fire house.

In 1982, the New Wells community wanted fire protection. A couple of the residents donated land and the Fruitland Fire Department built a building in New Wells. “We put a pumper and a tanker in there,” Koeberl said.

“The community kept growing,” he continued. A training room was added onto the Fruitland Fire Station. Two more tankers and a fire truck were purchased.

The original fire station was outgrown, so it was torn down and replaced with a new building that had four bays, a training room, a kitchen and four bedrooms. Land for the new station was donated by Harry McDowell.
A third fire station was built near Procter and Gamble.

When the fire department started, many of the volunteer firemen worked at P&G. They could easily take off from their jobs to go fight fires. But over time, that has changed. It became harder to run an all volunteer department.

“We went before the community two years ago and said we need a full time person,” Koeberl said. Voters passed a tax increase. Originally three people were hired full time, including the chief and an office person. Later, three more were added.

“From 7 a.m. to 6 p.m. was always a bad time for a vehicle accident and things happening,” Koeberl said. “We had those people on at that time with a split shift.”

As of this past December, when two more firefighters were hired, the Fruitland Fire Department began being manned 24-hours a day. The chief and two or three full-time firefighters are on duty, and they handle all the medical calls.

The department uses a pickup truck for medical calls because it can respond faster than a big old fire truck on the county roads. “Our response time is so much faster,” Koeberl said.

With all the changes, volunteers are not a thing of the past. There are still more than 30 volunteers on the department. When there is a major event such as a wreck or a house fire, the call still goes out to volunteers.