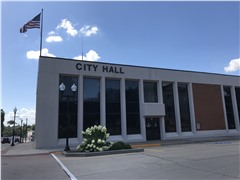 “We have a lot of good things to talk about,” said John Mehner, president and CEO of Cape Girardeau Area MAGNET, as he addressed the Jackson Mayor and Board of Aldermen in a study session Nov. 4. MAGNET recruits businesses to move to this area.

“We currently have 12 active projects we are working [on] that represent 440 jobs and $37 million in investment as possibilities; we have six projects that have dropped off the radar for the year, and one project that was lost to another community during this calendar year,” he said.

Mehner was excited to announce that a retail business is looking to open a store in this area, perhaps at Center Junction (between Cape and Jackson), in the next 18 months or so. He could not mention the business name, but said it has a “great online presence,” is headquartered in “a state north of us” and will open one brick-and-mortar store in Hannibal first.

Representatives from that business have visited our area. “They were thrilled with what they saw here and they think we will get location number two,” Mehner said.

One problem with getting businesses to move here is that we have low unemployment. With few people looking for jobs, companies wonder how they will find employees if they locate here.

MAGNET has hired an outside consultant to help develop a work force. The focus is on three sectors:

• Keeping high school students who graduate in this region and don’t go to four-year institutions from moving away to find work elsewhere;

• Keeping local college graduates in this area; and

• Keeping mid-level and post-mid level managers here or getting them to move here when they switch companies.

On a positive note, Cape Girardeau County through 2017 has $1.5 billion in retail sales, which is huge. Out of 114 counties in Missouri, Cape County is second in “pull factor,” a formula that measures people coming into the county to buy in relation to the number of people living there. The county with the top “pull factor” is Taney County, home to Branson.

Alderman David Hitt asked about the progress of developing I-66 or the “TransAmerica Corridor.”

Mehner said there are people in Washington, D.C., who are lobbying for it to be a “corridor of the future.” It may not be a normal highway as we have seen in the past. Instead, it will be built for self-driving vehicles, etc.

The route is not set in stone, but it will enter the Cape Girardeau area using the Bill Emerson Bridge, and go west to Springfield.

“The geographic population center of the United States is in Texas County, Missouri,” Mehner stated. Our area being so close to that center provides “awesome opportunities” for growth here, Mehner said.

• City budget: The Board set a public hearing for 6 p.m. Monday, Dec. 16, to consider the proposed 2020 city budget, which includes utility rate adjustments and other utility service rate adjustments.

• Wage survey: The Board accepted the 2020 Employee Wage, Salary and Benefits Survey, as prepared by the Labor Management Advisory Group, Inc.

• Water line: The Board approved a $38,906 task order to Horner & Shifrin, Inc., of St. Louis, for providing a design analysis of the East Main Street Waterline and Pavement Improvement Project.

Along with the installation of a new water main, this analysis consisted of looking at the street grade and drainage inlets to improve storm water drainage and the removal of unused railroad tracks that cross East Main Street near Co-Op.

• City banking: The Board accepted a proposal from U.S. Bank of Jackson for the City’s Comprehensive Banking Services Program.

• Sanitary sewer: The Board accepted a sanitary sewer and utility easement deed from Michael K. and Linda J. Haynes.

• Cemetery building and storm shelters: Mayor Dwain Hahs announced that the new building in Russell Heights Cemetery has been completed.

City staff advised against the abandonment in case the easement is needed to run utility lines in the future.

The Board told the property owners they could make whatever improvements they wanted to make (grade gravel, trim or remove trees, etc.) on the easement, but the City reserves the right to use the easement; to dig it up or build a street there in the future if necessary.

• Outreach Board: The aldermen discussed a problem of having very few members show up for Outreach Board meetings (there are 15 Board members and perhaps four will attend meetings).

The Board discussed allowing noncitizens to serve on the Board in a nonvoting capacity (some nonresidents have shown interest in serving but are prohibited from doing so by city ordinance). This idea was rejected in favor of making a smaller Board, perhaps of nine participants.

Before any changes are made, current Outreach Board members will be contacted and asked for their input and if they wish to continue serving on the Board.

With these improvements, Jackson could possibly go from a “Class 4” city to a “Class 3” city. That would lower homeowners insurance premiums.

Alderman Paul Sander said he contacted the City of Sikeston, which handles its stray animals in house, and the cost to do that was $150,000. Sander was not in favor of the City of Jackson taking on that role. He was in support of the contract with the Humane Society, but he would like to see data supporting the rate that is being requested. “I’m in favor of this number if they can support it,” he said.

The aldermen said they wanted to know what formula was used to determine the rate, how the Humane Society determines if an animal comes to them from within or outside of city limits, and how high the rate will eventually go. Will it continue to increase approximately $20,000 a year?

The Aldermen will have to decide this December if they want to go for a charter form of government for the issue to appear on next April’s ballot.

If voters pass the measures, the commission would then write a charter, which voters would approve (or not) on the August ’20, November ’20 or April ’21 election.

“The key is having a good commission,” Ludwig said. “If they have time to work, they can get this knocked out in a few months.”

Most likely the commission will study charters from other cities in Missouri, such as Cape Girardeau and Sikeston, copying the best parts from those.

“Ninety percent of it is written,” said Mayor Dwain Hahs.

The aldermen felt there was no need to rush the process; it did not have to be on next April’s ballot. They will discuss the matter again during the Dec. 2 Board of Aldermen meeting.