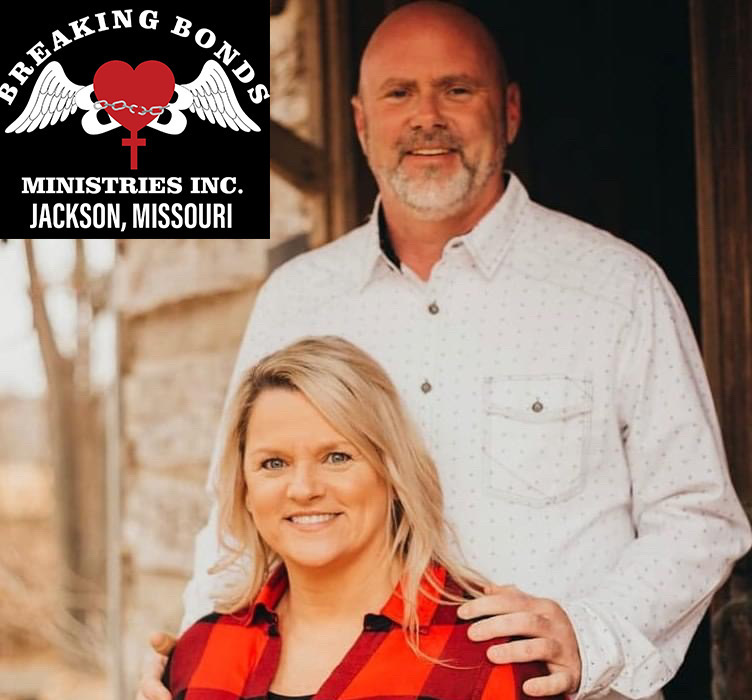 Brandon and Michelle Murphy serve as director and co-director of Breaking Bonds Ministries Inc. Their office is located in New McKendree Church in Jackson. Submitted photo

Breaking Bonds Ministries, Inc. is a seven-month faith-based drug and alcohol treatment program that has recently come to this area. Although it is partnered with New McKendree United Methodist Church in Jackson, the treatment facility is located at 878 County Road 637, Cape Girardeau, which is “way out in the middle of nowhere,” according to Director Brandon Murphy. It is approximately 10 miles from Trail of Tears State Park.

An open house is scheduled at the treatment center from 10 a.m. to 2 p.m. this Saturday, April 10, with a ribbon-cutting ceremony at noon. Hot dogs, cookies and drinks will be served. Among the attendees will be a bishop from the United Methodist Conference.

Breaking Bonds is a program similar to Teen and Adult Challenge. The program places men who have addictions into a seven-month treatment program.

For the first 28 days, they go through a blackout period where they are allowed no contact with their families. “Many are not in good standing with their families,” Murphy explained. The blackout “gives the families some rest” and gives the addicted men time to “clear their minds and focus totally on why they are here.”

Some of the men have supporting families who will take them back. Others have no one. Some will develop contacts with business people as they do work for them while in treatment, and they will be helped by their contacts to transition back into society.

Unlike Teen Challenge, Breaking Bonds partners with one church; in this case it is New McKendree in Jackson.

On Sunday mornings, the men attend church at New McKendree. They attend classes all day long on Mondays and Tuesdays at the church. On Wednesdays through Fridays, they work for various businesses and individuals, doing yard work or minor construction. “We can do everything except build a house from the ground up,” said Murphy.

On Tuesday evenings, there is a special Breaking Bonds service at the South Campus of New McKendree. The men enrolled in Breaking Bonds attend, but the meeting is open to anyone in the public who suffers from addiction and their families.

“It’s a recovery service for people in recovery in the community,” explained Murphy. In Jonesboro, AR, this service began with 10 people and has grown over the years to more than 400 attendees.

The public also may attend the Sunday service, share a potluck and visit the treatment facility until 3 p.m.

How did Breaking Bonds, based in Jonesboro, AR, become associated with New McKendree Church in Jackson?

Breaking Bonds Founder Casey Turner took a seminary class in Kansas City from Bruce Baxter, the Southeast District superintendent of the Missouri Conference of the United Methodist Church. Baxter became interested in Breaking Bonds’ accomplishments in Jonesboro, and he sought out a church in his district to be a partner. “He felt New McKendree in Jackson would be the best fit for us,” Murphy said.

In the fall of 2019, New McKendree sent a bus load of people to Jonesboro to check out the program. They attended a Breaking Bonds service and toured its facility. “It had a first-date feel to it,” recalled Murphy. “It was kind of awkward. But they were highly impressed.”

Turner later asked Murphy to direct the new facility planned for Southeast Missouri, but Murphy turned him down. “I wasn’t ready then,” he explained.

Since that time, Brandon married Michelle and started working in the Jonesboro office, acquiring administrative skills. Last November, he and Michelle had talked about making the move, prayed about it, and decided they were ready.

Michelle, a Dexter native, serves as co-director and office administrator of Breaking Bonds here. The office is located in the New McKendree Church.

When they moved to Jackson to begin the program here, the Murphys brought  with them four men who had been enrolled in the program in Jonesboro but were from Southeast Missouri. They now have 10 men in the local program. The 2,900-square foot home they use for the treatment facility has room for 15.

Two of the men will complete their seven months and will graduate next Tuesday, April 13, at the first Breaking Bonds service to be held in New McKendree’s South Campus. The service will begin at 6:15 p.m.

Murphy can’t say enough good things about New McKendree UMC. “They have been a blessing to Breaking Bonds,” he said.