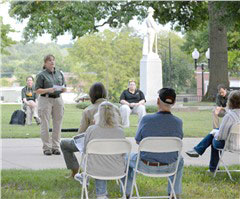 The Bollinger Mill State Historic Site and the Trail of Tears State Park held a public information meeting on Sept. 3 at the former Cape Girardeau Courthouse lawn in Jackson.

Representatives from both locations said that they faced some challenges due to the COVID-19 pandemic, but that attendance overall is higher this year. Denise Dowling, park superintendent for Trail of Tears State Park, said visitation across the entire state park system is high.

Trail of Tears had 62,000 visitors from January to July last year. This year, during the same period, the park had 105,000 visitors. Dowling did say some of the sharp increase is due to the flooding the park had in 2019.

Dowling said they were worried about flooding again this year, when the park flooded three times this spring, but this summer the river is lower than it has been in four to five years.

The park’s campgrounds were closed because of COVID-19, but reopened slowly in May as they tested out their new safety procedure. Once the campgrounds were fully open, Dowling said they have had record use, growing 109 percent compared to last year.

Dowling added that they are currently researching Lewis and Clark to incorporate their history. The expansion of the trail added 1,200 miles, including the Ohio River and a short segment of the Mississippi River.

Bollinger Mill State Historic Site Superintendent Muriel Zachary said they have also had high attendance recently, but had to cancel some events due to the COVID-19 pandemic.

“We tried a couple of new things with our special events in 2019 and they ended up working out really well,” Zachary said. “We were excited for this year, but everything got cancelled – so we’re excited now for 2021.”

The site hosted a summer fun event, a fall festival and a Halloween event, all of which are in the works to return next year. The fall festival was the highest-attended event, with 1,600 people visiting the Bollinger Mill.

“One of the neat things we did was we opened the mill up for self-guided tours, so people could just wander through,” Zachary said. “We had people who were locals who said they hadn’t been in the mill since they were a kid. We also had a lot more families with little kids who probably couldn’t do a 45-minute guided tour.”

Zachary said they had 700 people tour the mill in one day. “That’s usually what we have in a month and a half,” she said.

The Whitewater Bluegrass Band, food vendors and antique tractors are all scheduled to come back for the 2021 fall festival event.

The mill also had several projects postponed because of the coronavirus, including a new roof for the mill and a survey of the cemetery on the historic site.

“The survey was all funded,” Zachary said. We were all set to go; we did a whole bunch of clean up work and then COVID happened. The company that was going to do that wasn’t able to travel across state lines to do that project.”

Zachary said the project is funded again, and they hope to complete the project this fall. The survey will allow the site to have a better understanding of the extent of the burial area.

Staff from both locations urged the public to reach out to them if they have any questions or comments about the park or historical site. Contact information can be found at mostateparks.com.