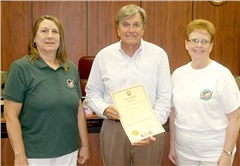 The owners of two undeveloped tracts of land north of Bent Creek Golf Course are seeking help from the City of Jackson to make future development of their properties possible.

Over time, pieces of these tracts have been sold off, and the two parcels are now landlocked — they have no streets accessing them.

There is no city street frontage to these tracts. However, just across the city limit to the north is the recently developed Savers Farm Subdivision, which has streets that end at the city limit.

The developer of Savers Farm Subdivision would like to continue to develop the remaining Drum property. The Litzelfelners would also like to sell their property.

The fact that the undeveloped property is inside city limits and the only access is through a private development outside the city limits causes problems.

For a residential subdivision within city limits, the city is expected to provide weekly trash pickup as well as all emergency services and infrastructure maintenance. That would require leaving the city limits and entering the development through the privately maintained streets.

The Board was asked if it had interest in annexing property to the north, which would put the Savers Farm Subdivision within city limits. However, if that happened, the annexed property would have to be brought up to city standards.

City staff will contact property owners to the north to see if they are interested in being annexed into the city.

Megan Andrews, an attorney representing the Drum family, said the Drums want to work with the city to solve the problem, but if they must de-annex their property from the city in order to develop it, they would be willing to go that route.

The Board of Aldermen want the land owners to be able to develop their land, but the aldermen are not sure of the best way to make that happen

“Let’s get everybody together and have some meetings,” suggested Alderman Dave Reiminger.

• Donated dugouts: The Jackson R-2 School District would like to construct new dugouts at Softball Field No. 5 in City Park and donate the dugouts to the City Park.  (That field is used by the School District softball team.) The estimated value of the donation is approximately $4,000.

The School District will maintain the dugouts prior to and during the high school softball season.

• Employee wage and benefits survey: The Board agreed to pay the Labor Management Advisory Group of Lee’s Summit $11,000 plus travel expenses for its work on the 2019 Employee Wage, Salary, and Benefits Survey.

• Power plant: The Board accepted the bid of $36,952 from Boulder Construction, LLC, of Cape Girardeau, for the Power Plant Maintenance Building Repair Project.

• Liquor licenses: The Board approved a change in the process of issuing liquor licenses to make it more efficient.

• Public hearing set: A public hearing was set for 6 p.m. Monday, Oct. 7, to consider a special use permit for a new property owner for an existing communications tower in a C-2 (general commercial) district at 2705 Hilltop Dr., as submitted by Wicks Properties, LLC.

• Liquor sales: Liquor sales were authorized for the summer concert event on Sunday. Oct. 6, at the Leist Memorial Band Shell in City Park, as requested by Rodney Barnes.

• Concrete paving: The bid of $284,835.30 was accepted from Mike Light Cement Finishing of Perryville for work on the 2019 Concrete Paving Improvement Program.

• Cemetery replat: The Board approved a record plat of a replat of part of Block B of Russell Heights Cemetery as submitted by the City of Jackson.