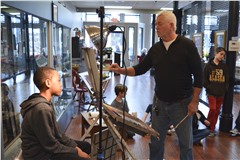 O’Donnell’s work was on display throughout the uptown district on Feb. 24, with paintings from his book, Painting Missouri, displayed at the Cape Girardeau County History Center.

For Painting Missouri, O’Donnell painted an outdoor scene for all 115 counties in Missouri. The book, which includes every painting accompanied by a historical essay written by Karen Glines, was published in 2008 and received the Governor’s Book Award the following year.

O’Donnell, who gave a presentation on the book with Glines for the event, said the project gave him the opportunity to capture the iconic landscapes and architecture of the state.

“Whenever a country comes in and takes over another country, the first thing they do is destroy the art, because people lose their identity,” O’Donnell said. “Karen and I felt a project like this would help give Missouri more of an identity.”

Throughout the seven-year process creating the book, O’Donnell completed about three paintings in every county, capturing a mix of historical buildings, the natural landscapes and the way the people who lived there affected the area.

O’Donnell painted during all seasons, bearing both the heat and cold of Missouri. He mentioned that the paint on his Ste. Genevieve County painting is thicker than others because the paint mixed with the falling snow.

He also made sure to talk to people in the counties to better understand and capture what made every county unique. O’Donnell mentioned fly fishers who cast their rods above his head and priests who let him climb to the top of a Cathedral Basilica in St. Louis.

In Scott County, he painted a watermelon stand where every time he came through, he was given a watermelon. “He always thought artists were starving,” O’Donnell said.

Both O’Donnell and Glines said they avoided talking about favorite restaurants or shops to focus on things that were unlikely to change much overtime. Despite this, the paintings and essays stand as a pinpoint of when it was created.

“The book is becoming more and more historic, because the different facets of the art are changing with time,” Glines said.

Some of the buildings highlighted in the paintings were destroyed in a tornado, while some older barns have been demolished since the book was published.

“I thought about this the other day,” Glines said. “When I go on I-70 or I-44 now, there aren’t as many barns standing around as when we started this project — which is very sad.”

Glines said she tried to write an equal amount for each county and wrote as if her grandmother was from there to make sure she gave it the same dignity as the counties close to her heart. For Cape Girardeau County, she had to shorten her essay, because there was so much she wanted to tell.

“I liked the fact that Jackson became the county seat and how far back Cape Girardeau history goes, unlike so many of the other counties,” Glines said. “It was one of the first five counties that made up Missouri, so there’s a lot of history here.”

O’Donnell, who painted the Bollinger Mill in the county, said he loved looking at the wonderful buildings and old architecture in the area.

The book is now in its fourth printing, and includes new adjustments to four to five paintings and an added index. Books directly bought from O’Donnell at the history center were signed and included a special stamp.

On Feb. 23 at the history center, O’Donnell met with 18 students from South Elementary School and their art teacher, Tina Sample. He did a painting of one of the students while teaching them about drawing portraits and the dimensions of the human face.

“I was really impressed with them,” O’Donnell said. “They were really sharp kids and on top of everything.”

When O’Donnell asked who in the class wanted to be artists when they grew up, more than half enthusiastically raised their hands.

“I hope that by seeing this and doing the little drawings they did, that they maybe take that out into the community and document their own community,” O’Donnell said. “When you go out and do that, you’re going to meet people and you’re going to learn a lot about your community.”