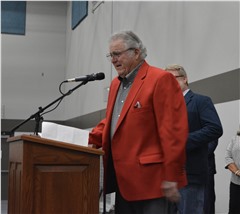 The Jackson Area Chamber of Commerce hosted its annual awards banquet on Jan. 12, with a record-breaking attendance. The chamber celebrated their award-winning year and honored area leaders and businesses.

Billy Joe Thompson received the R.A. Fulenwider Award for his dedication to the advancement of the community of Jackson. The annual recipient is chosen by former winners of the award, and 2016-winner David Reiminger presented the award.

Thompson has been involved with many organizations in Jackson, including the Optimist Club and the Boosters Club. He has been a concession stand volunteer for more than 25 years, and Reiminger stressed that Thompson’s favorite color was “red and black.”

Mondi Jackson, which has two local facilities and employs approximately 400 people, received the Industry of the Year award. The manufacturing company has a broad range of flexible packaging for consumer goods ranging from frozen food to detergent pods.

Bold Marketing received the Business of the Year award. The marketing firm was founded by Dana Thomas in 2008 and now has offices in Cape Girardeau and Nashville.

Benchmark Graphics and Printing received the Small Business of the Year Award. The company started with a thermal system that only printed black and white, and has grown through digital and same-day printing.

Justin McMullen won the Marybeth Williams Educator of the Year Award. He is the girls soccer coach and a physical education teacher for Jackson High School. McMullen said he has dedicated his life to education to make a difference in his students’ lives.

Arron Olivas won the Sam Roethemeyer Ambassador of the Year Award. Olivas is in his first year as a sales representative with SEMO Imprints, but has quickly become involved with the Chamber. Olivas said he regularly attends Chamber events to support his business and the Chamber as a whole.