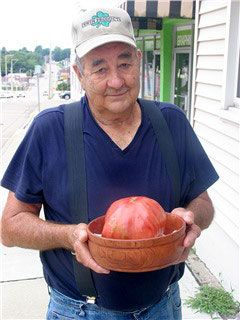 This story is about giants, seeds and a man from Millersville. But it’s no fairy tale.

The “giants” in this story are not ogre-like inhabitants of the clouds approachable by a beanstalk sprung from magic seeds. They are red, round, juicy tomatoes, some of them tipping the scale at three pounds.

The “seeds” are not magical beans, but tomato seeds saved over winter to grow a new crop of giant tomatoes the following summer.

Aubrey Rutherford grows these mammoth-sized heirloom tomatoes at his home in Millersville.

About six years ago, a friend gave him three plants from some tomato stock that had been in the family for generations. These plants grew gigantic red tomatoes that were not only wonders to behold, they were “good eating!”

These tomatoes have a skin so thin that they damage easily. When he brought one to the offices of The Cash-Book Journal recently, he carried it delicately in a wooden bowl with a folded paper towel for cushioning.

Inside these tomatoes are not a lot of seeds, but there is a lot of good, juicy flavor. Rutherford said yellow tomatoes generally have less acid than red ones, and that gives them the best flavor. But Rutherford says he likes the flavor of his giant red tomatoes even more than yellow ones.

As big as they grow, one might wonder how many can grow on one plant. Rutherford said he can find up to 20 monster-sized tomatoes on each plant.

Although he is in his 80s, Rutherford lives an active life. He doesn’t just sit around watching tomatoes grow.

In the wintertime when his garden is dormant, he makes wooden bowls like the one in the photo. (The one in the photo has not been finished.) He slices up logs and then hollows out one side with a lathe to make a bowl. When he gets done carving, sanding, staining and finishing a bowl, it has become a piece of art. They can be purchased at The Painted Wren in Cape Girardeau.