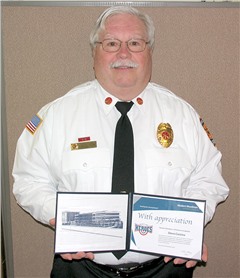 Assistant Chief Steve Corzine of the Gordonville Fire Department has been named a “Hometown Hero”  by Modern Woodmen.

Corzine retired in 2002 from his job at the United States Penitentiary in Marion IL.

“After I retired, I didn’t think I was a people person,” he said. But it wasn’t long before he missed being with people. So he began helping out with Marion ER and the Jackson County Ambulance Service.

Because his wife worked at St. Francis Hospital, it soon made sense to move to this area, cutting down her drive time.

After moving here, Corzine began volunteering with the Gordonville Fire Department. Although it’s not a paid position, Corzine said, “I spend a lot of time there. I take care of invoices and do a lot of odds and ends.”

About 80 percent of the calls to the Gordonville Fire Department are medical calls. “Gordonville is fortunate enough that we do everything but transport [patients],” Corzine said. The Department has its own EMTs and paramedics.

One memorable event occurred a few years ago when  a little girl was found in the bottom of a swimming pool. The mother called 911 and started CPR. When Gordon-ville firefighters arrived, the girl was barely breathing. They continued administering life support measures until an ambulance arrived. “I don’t know how long she was down there,” Corzine said. But the girl fully recovered from her near-drowning.

The Gordonville Fire Department is made up of all volunteers. When a call comes in to 911, the County dispatches the volunteers by using pagers.

There are 35 members that make up the Department. They work out of three stations. Station No. 1 in Gordonville has two engines, a tanker, a rescue truck, and a 4WD brush truck to fight wildfires.

“We house the county’s only air van at Station 1,” Corzine said. The air van contains compressed air that is dispensed into the air tanks firefighters use when battling blazes and surrounded by suffocating smoke. “We can fill two at a time,” he said.

There is a second station at Tilsit that houses a fire engine. Normally, a tanker is kept there as well, but the Department is awaiting the arrival of a new tanker.

A third station was in Dutchtown, but it was flooded out of its location there. It then moved east on Highway 74. It houses a fire engine and a tanker.

Corzine has praise for his fellow firefighters in Gordonville and for those who serve on neighboring fire departments. “We have a very good department,” said Corzine. “We have good mutual aid with everybody.”